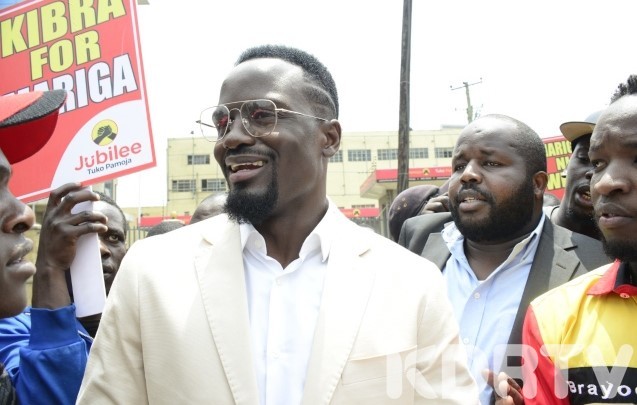 Jubilee Party’s election board chairman has insisted that McDonald Mariga is their ideal candidate for Kibra by elections to be conducted in a few weeks.

Andrew Musangi made this clear during a press briefing in Pangani, the party’s headquarters.

According to Musangi, the decision was not just arrived at without consultations. He said that the party had complied with the constitutional mandate and interviews were conducted through face to face interviews with all the applicants.

“We received a total of 16 applications from interested parties, and we settled on Mariga due to his impeccable character and ability to drive the jubilee agenda in Kibra after he wins,” said Musangi.

This announcement came just a few hours after the party’s candidate Mariga had finished filing his papers and got cleared.

The former footballer refuted claims of being a Ruto project while defending his candidate and reasons to win as having born and bred in Kibra.

Kibra has been widely known to be ODM leader Raila Odinga’s strong hold having served as an MP in the region for a long time.

Ideally, the former MP Ken Okoth who succumbed to cancer leaving the seat vacant was from the ODM party, making the incoming by elections very intense.

Mariga’s interest to run for Kibra elections was met with a lot of criticism especially to social media users, with majority of the questioning him on what he had delivered since playing football in high leagues.

Mariga has been known to be a flamboyant spender during his football days, driving the most expensive cars and spending recklessly on partying and material things.

However, he defended himself saying that he was ready to bring the change that Kibra people want, and through Jubilee that change would be witnessed.

The Kibra by election is very intense encumbered by candidates from different parties ready to battle it out. the results might determine Raila Odinga’s strength in the region as well as his part ODM.