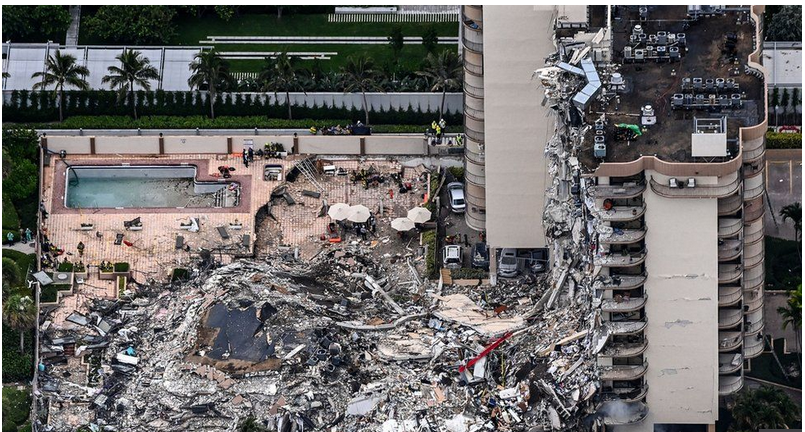 Images from the Miami building that collapsed on Thursday morning

The number of missing persons in the Miami building collapse has risen to 159 while 4 have been confirmed dead. 103 people have been accounted for.

What made the 40 years old building collapse on Thursday morning is still unclear.

Miami-Dade says that they still have hopes of finding more survivors.

President Joe Biden had declared Florida to be under emergency and thus the Federal Emergency Management Agency (Fema) will help the state agencies with the reflief efforts.

Family and friends and still desperately hoping to hear good news about their loved ones.

Full investigations into the cause of the collapse will commence after the rescue mission.

One person has been confirmed dead and 99 are still missing, while 102 have been accounted for, say rescue crews.

Families are currently waiting for news as the rescuers desperately listen for signs of life in the rubble.

The rescuers have been using sonar cameras and specially trained dogs to search for the survivors.

One person has been confirmed dead while 51 more are uncounted for on Thursday, says rescue crews.

A condominium building collapsed in Miami in the early hours of Thursday.

Rescue crews are searching for survivors under the rubbles of the 12-story Chaplain Towers South condo in Surfside. The building collapsed at 1.30 am.

Authorities say that 51 people could be trapped underneath the rubble.

According to witnesses who spoke to KDRTV through phone calls, the sound of the collapse was like a bomb going off.

According to the Miami-Dade department of emergency management, 70 of 130 apartments were destroyed.

The Miami authorities told the press that the reason for the collapse was not immediately clear.

“It’s the unimaginable,” Daniella Levine Cava, the Miami-Dade mayor, said. “A massive search and rescue mission is under way. We are going to do everything we can possibly to identify and rescue those who have been trapped in the rubble.”

The concerned friends took to social media to report their missing friends in the building collapse.

The Red Cross established a reunification facility for the survivors and their families at a nearby community center.

The incident sent a cloud of debris coating various cars nearby.

Unverified reports indicate that the maintainace work had been underway on the roof of the building before collapse.

The reports indicate that the building was housing international combination of residents and tourists.

Rescue operations were still underway by the time we were publishing this report.