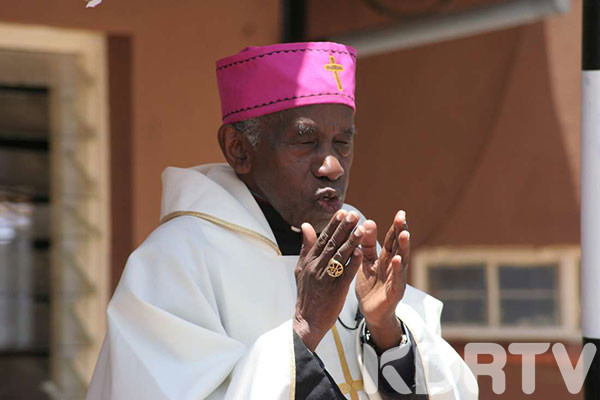 (KDRTV) – Controversial lawyer Miguna Miguna has controversially claimed that deceased Catholic Archbishop Ndingi Mwana a’Nzeki was married to five women. The Catholic church does not allow its priests to get married.

Mwana a’Nzeki passed away on Monday night at the ripe age of 88. He has been celebrated nationally and internationally as a fearless man of God who risked his life to fight for freedom in Kenya.

Leaders among them President Uhuru Kenyatta, his Deputy William Ruto and ODM leader Raila Odinga all eulogized the Archbishop as a man whose bravery shaped the nation as it is now.

Ndingi was one of the brightest lights to have graced our nation in our time. Kenyans knew they could always count on him to stand and speak out for truth and justice whatever the threat that posed to his life. 1/2 pic.twitter.com/bzVm0gIyQs

Mwana a’Nzeki was the first person to oppose the Moi government regime’s Mlolongo system of governance. In the 1990s he risked his life when he spoke for victims of tribal clashes in the Rift Valley.

He will also be remembered for the way he protected Nobel Peace Prize Winner and Environmentalist Wangari Maathai.

However, Miguna Miguna has urged the Catholic Church to allow its priests to get married.

“Rest In Peace Ndingi Mwana a’Nzeki. The Pope should allow Catholic Priests to marry. I hope that Ndingi’s five wives will openly attend his funeral with their children and grandchildren,” Miguna said.

The controversial lawyer further said that he should not be asked to table evidence. He also claimed that the current Nairobi Archbishop John Njue also has wives.


“Even Father John Njue knows that I know his wives, too. Hypocrisy, lies and deception cannot be Kenya’s national culture,” he added.

His claims have raised a storm on social media with most Kenyans claiming that this could be the reason he is exiled.

Miguna has developed a habit of making vile and unsubstantiated claims against leaders in Kenya. He should not be taken seriously.