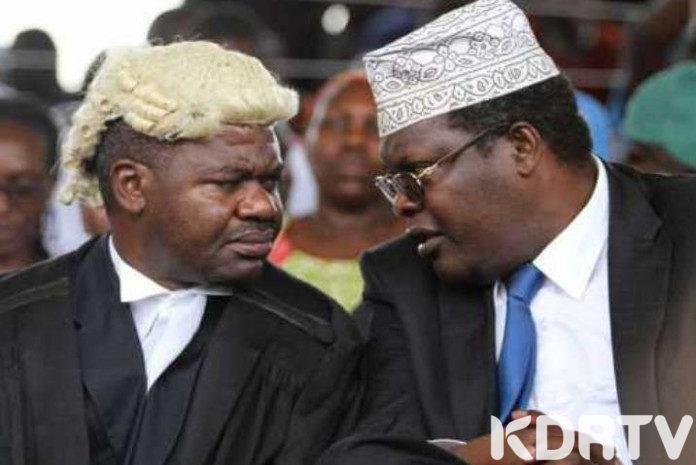 Miguna Miguna on an exclusive interview with Jeff Koinange of Citizen News opened up to more insights and behind the scenes abracadabra leading to the swearing ceremony that took place at Uhuru Park on January 31, 2018.

He got an opportunity to summarize his his book titled Treason – The Case Against Tyrants and Renegades, he narrated all the planning and the execution of the swearing ceremony and the back door intrigues ,and claims that he was the lead and master planner in all the sessions. In a nutshell he claims that it was him who convinced Raila Odinga to take the oath which was by itself was considered treason.

By extension the other three principles, Musalia Mudavadi, Moses Wetangula, and Kalonzo Musyoka skipped the event and Miguna calls them cowards who can’t stand a test of time and defend their fight against corruption and inept regime which has downtrodden the common man for over fifty years they’ve been in power since Kenya attained her independence in 1963.

In an apparent admission to an astonished Kenyan viewers, Miguna admitted to have voted for President Uhuru Kenyatta a nemesis and foe but turned friend to the Former Premier, Raila Amollo Odinga who currently enjoys state rapport with the President and has become the number one defender of his policies.

Miguna Miguna laughs off this arrangement of the Handshake which brought Raila and Uhuro,and poignantly points out his prophecy which he claims has come to pass that Uhuru Kenyatta and Raila Odinga are cut from the same cloth. They can’t transform Kenya. Kenya needs transformative brains and people willing to take risks and fight for real democratic space which will in essence create a viable space for a robust economy.

On conclusion Mr. Miguna Miguna wants able and patriotic Kenyans to join him and his National Revolution Movement to change Kenya forever so that all Kenyans can enjoy their Country’s resources without the status quo dictating how the resources are shared.