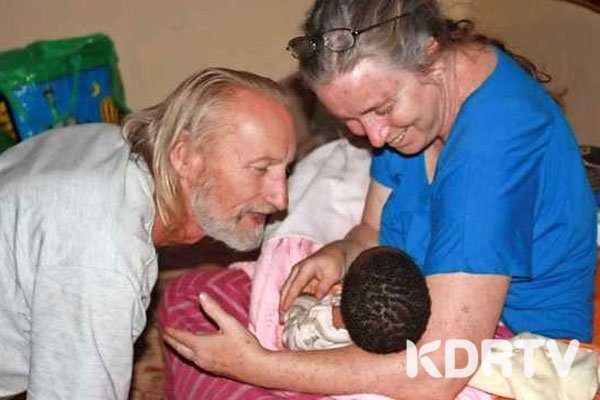 Gregory Dow and his wife Marry Rose attedning to a minor

A missionary for Pennsylvanian national, Gregory Dow, 60, has been arrested and charged with sexually abusing children at an orphanage he established in Kenya, reported federal officials.

KDRTV followed the occurrences and can thus authoritatively report that Gregory Dow, was bundled into police custody on Friday at his home situated in Lancaster County, Pennsylvania.

Reportedly, Dow established children orphanage in Kenya in 2008 and allegedly abused several minors under his care for years. This is according to the US Attorney`s Office in the Eastern District of Pennsylvania.Gregory was accused on four counts of involving in illicit sexual conduct in a foreign location.

Purportedly, the abuses transpired between October 2013 and September 2017 at a facility he established in a rural area of Boito, reported CNN.

According to the authorities, there may be more victims however, tracing them back in Kenya is a great challenge.

“The defendant purported to be a Christian missionary who would care for these orphans who called him dad,” the statement said. “But instead of being a father figure to them, he allegedly preyed on their youth and their vulnerability.”

According to a report by a local media, the orphanage that hosted dozen of children was closed in September 2017. Gregory Dow fled to the US after Kenyan authorities tendered an arrest warrant on him.

“It is one of the most heinous crimes, going out and actually sexually abusing young children,” FBI Special Agent Joe Bushner said.

KDRTV understand that the story had made several rounds in Kenya with NTV airy a related documentary dabbed “Preying Missionaries”.