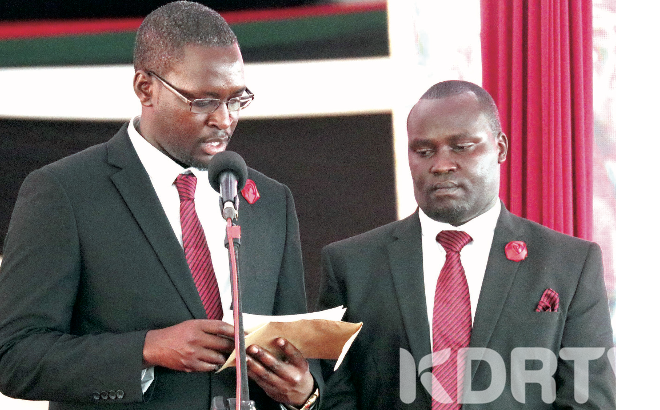 (KDRTV) – Baringo Senator Gideon Moi might have inherited his father’s symbolic rungu ya Nyayo but he is not the only family member with political ambitions.

During Mzee Moi’s funeral on Wednesday last week, one of his grandsons delivered a speech that has elicited mixed reactions in Baringo County.

Clint Moi, the son of the Late Jonathan Moi, was the only member of the family who took time to appreciate the people of Baringo for giving Moi to the world. Baringo is considered the backyard of the late President. He was MP for more than 35 years.

“He was and remained a dutiful son of Baringo and for that, I want to send my deepest and sincere appreciation to the people of Baringo…” he said.

He was a man of such great stature that the name Moi was once synonymous with president. When I was younger, a common joke amongst my peers was: Moi wa Uganda ni nani?- Clint Kiptono Moi #MoiFuneral pic.twitter.com/KQijJ33xhr

“I want to thank you for gifting Mzee Moi to my family and to the world. We could not have experienced his greatness without your support and I speak for many saying we remain indebted to you all,” Moi’s first grandson added.

According to many residents, this was a well-crafted message that may only make sense in years to come.

At 34 years, Clint holds a Finance Degree from an American based University. In 2017, he applied for a CEC post in the government of Baringo Governor Stanley Kiptis. He didn’t get it.

Those who know him claim that the young Moi has been spending a lot of time at their Kabimoi home in Baringo, trying to acquaint himself with the locals.

When ownership issues supercedes other journalistic considerations, it leaves a would be a good newspaper to stink .@TheStarKenya becomes boring when it propagates interests of its owners.

GM is nowhere near being ELECTED by anyone.

He is considered to be the most approachable member of the Moi family and is not afraid to face journalists. As the other families were mourning Mzee in Nairobi, Clint spent most of his time at Sacho and Kabimoi where he condoled with locals.

Jonatha unsuccessfully vied for Eldama Ravine Constituency seat in the 1997 and 2002 elections.

If Clint decides to go for this seat in 2022, he will come up against current MP Moses Lessonet of Jubilee. The region is predominantly a KANU stronghold. He might have a chance.