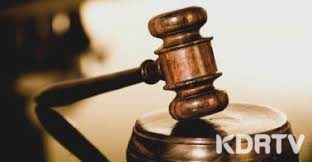 A Mombasa based magistrate shocked the court today by delivering justice in the most unique way and expressing acts of kindness.

During a court ruling, a woman pleaded guilty of shoplifting weaves from a supermarket that had her liable for a two year sentence or fine for Ksh. 50,000.

The 19 year old is believed to have involved in the act in one of Mtwapa’s supermarkets where she shoplifted two weaves before being caught and arrested.

As part of her explanation, the lady narrated that she wanted to look beautiful and fit in like all her friends although she did not have the funds and came resided from a poor background.

Therefore, as her solution to look beautiful, she opted to steal the weaves and look different.

Shoplifting and theft are illegal and punishable by the court of law.

After her judgment was delivered, the senior magistrate Patrick Odhiambo resorted to the most unusual action.

He politely directed the court and those who were available to help the young lady in clearing the fine so as to avoid jail time.

At 19, a jail sentence would have distorted her life and done ore harm than good.

This was distinct and has never happened in the history of Kenya.

He voluntarily asked the people present to contribute Ksh. 100 each as part of compensation for the supermarket.

The lady exhibited happiness and relief for being  out of the flames as well as the congregation in the court room.

People were moved by the acts of service as it does not happen on a daily basis.

In the recent past, petty thieves have been the ones receiving harsh judgments while big wigs in government went Scot free.

Billions have been lost to corruption but so far, none of the suspects have been prosecuted nor sentenced.

On the other hand, an elderly woman in possession of bhang was sentenced to life imprisonment while a chicken thief close to 10 years in prison.

Although the judge was lenient, he emphasized on importance of being oneself and not try to fit in as it had consequences.

He ideally advised against any forms of theft insisting that people should work hard for anything they wanted in life.

Although the law often catches up with people, to some it is more lenient and slower, like the corrupt government officials who are busy laundering public funds.