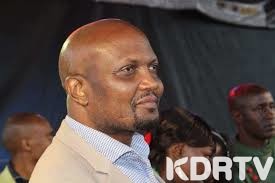 Gatundu South Member of Parliament (MP), Moses Kuria has asserted that the Building Bridges Initiative (BBI) report that has just been launched on Wednesday, November 27, could a be a fake version.

The TangaTanga allied MP took to social media on Wednesday, November 27, exposing his efforts to combat the formation of another task force to review the report.

Mr Kuria who has been a great critic of the BBI initiative comically taunted the inauguration of the report by President Uhuru Kenyatta, Orange Democratic Movement (ODM) leader Raila Odinga and Deputy President William Rut iso terming it an ODM national convention event.
This ensued after the Elgeyo Marakwet Kipchumba Murkomen expressed his distress about the report.
Murkomen was booed by the delegates after he faulted Junet Mohamed on the way he was running the event`s program.
Moses Kuria had earlier given terms and conditions on which he will support or reject the BBI report.
Read also: Murkomen Booed During BBI Launch
The BBI report advocates for the retention of a stronger president who will appoint the Prime Minister from the largest party in the National Assembly.
Kuria post about the ‘BONOKO’ BBI report stirred a mixed reaction from a section of Kenyans.
Subscribe to watch latests videos
In this article: