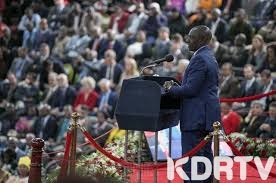 A video in which Deputy President William Ruto looks uncomfortable as his boss President Uhuru Kenyatta laughs at a joke cracked by Junet Mohammed has gone viral on social media. Interestingly, Junet had warned Senate Majority Leader Kipchumba Murkomen not to bring Jubilee problems to the BBI launch. So was Uhuru, the Jubilee Party leader, laughing at his party’s problems?

The video summarised everything that is wrong with Ruto and his Tanga tanga group. The fact that Junet Mohammed, an ODM MP. was allowd to preside over the function means ODM is in government. So who is in the opposition?

Junet invited only ODM politicians to speak at the event. If you were not in ODM, then you had to be in the Jubilee faction of Kieleweke like Anne Waiguru and Sabina Chege. All of them spoke glowingly of the BBI report. Only Murkomen was allowed to speak in his capacity as the majority leader. He was booed after trying to complain about how Junet was treating Ruto’s camp.

Yusuf Haji, the BBI taskforce co-chairman had to intervene for Murkomen to continue speaking. When he retook the microphone, he changed tune and started praising the BBI taskforce. Murkomen had been cowed. This is the same man who had vowed not to table the report in the senate if Raila does not renounce violence.

H.E Uhuru must be COMMENDED for building bridge with Hon Raila & bringing him from the COLD. So when is Uhuru building bridge with his Deputy Ruto,end the palpable cold war he has with him?The discomfort,the unease, the total absence of communication btw Uhuru & Ruto is DANGEROUS

There was also an embarrassing moment for another Tanga tanga member, Dennis Itumbi. He was chased from the VIP dais like a rat. Itumbi was once a statehouse darling. But things have not been easy for him since that fake murder letter in June. The case is still in courts and he could soon find himself behind bars.

Ruto could not help his boys as they were harassed at the Bomas. Because he can’t. The DP was uneasy during the whole function. He looked out of place. His body language portrayed an orphan at his parents’ funeral. And Junet took advantage of the situation to rattle the Tanga tanga team even further.

In June 2017, Raila Odinga arrived at the Madaraka Day Celebrations in Nyeri County. Nobody recognized his presence. Both Uhuru and Ruto ignored him. At Bomas, it was Uhuru and Eaila who ignored Ruto.