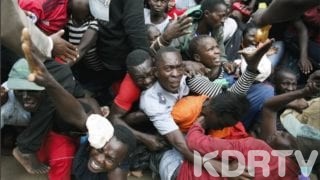 According to our previous reports, two people were killed during the stampede.

According to the female lawmaker, she shifted her blames to the authorities who were charged with the role of distributing the food to the vulnerable slim dwellers

Millie Odhiambo took to her Twitter account on Saturday, April 11 where he defended the Orange Democratic Movement (ODM) saying that he was not present during the incident

“Raila donated food to Kibra, didn’t even go there himself, food was handed to local authority who were then responsible for distribution, “Its illogical that even the so-called learned people can’t place the blame for the stampede rightly because they *cu when they mention Baba,” said the lawmaker.

The urban poor have no food. The middle class will join the group shortly, now that they won’t earn a wage this month. Will the upper class survive? What, between Covid-19 on one hand, hunger and war for food on the other hand, is likely to kill them? Can Joseph Goebbels answer? pic.twitter.com/GPm37BPu8S

We confirmed that the consignment of donated foodstuffs was from Raila Odinga and friends in partnership with corporates such as Kenya Pipeline Ltd, Bidco, Tononoka Steels Ltd, KAPU Africa and Kapa Oil to Kenyans

Read also: US Confirms 1, 800 Coronavirus Deaths In A Day