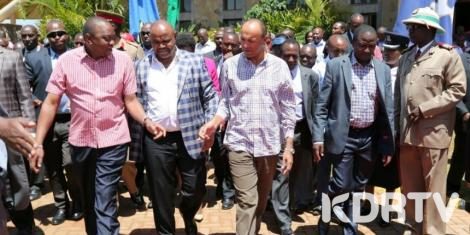 ODM leader Raila Odinga has vouched for the inclusion of Peter Kenneth in government, saying the former Gatanga MP was among the most competent Kenyans Uhuru should give a job. Raila,  who was speaking in Gatanga during the burial of Peter Kenneth’s mother said Peter Kenneth’s records speak for itself.

“We are here to condole with you for losing Mama Rahab, who brought up this man ‘Muthongo wa Gatanga’ into the gentleman he is…. His ways, the way he handles his business and the way he presents himself you can see he is a gentleman. So Mr. President, this man needs to be given a job in government,” said Odinga, causing the crowd to burst into laughter.

The funeral service, also attended by President Uhuru Kenyatta and DP William Ruto attracted the public as well as other political leaders. Odinga narrated how him and Peter Kenneth shared a close relationship, having worked together at various levels of government when Raila was the Prime Minister.

” I have known Kenneth for a long. We have worked  together  for the government before. He has also worked in the banking and insurance sectors. He also loves football and that is something we have in common,” Raila said.

President Uhuru Kenyatta has dished out lucrative State jobs to former elected leaders who lost their seats in the previous elections. Peter Kenneth is considered one of the most influential foot soldiers Uhuru has in Central Kenya.  It is the former Gatanga MP who led a troupe of leaders t defend the president when he was under attack.

(KDRTV) – Director of Criminal Investigations (DCI) has summoned Ex-Nairobi Governor Mike Sonko over his recent utterances. Sonko is to appear appear at DCI...

(KDRTV) – The Wheelbarrow Party has switched its focus to Machakos County where it aims to battle regional political kingpin Kalonzo Musyoka in the...

Mt. Kenya politicians have come out explicitly to ditch Raila Odinga ahead of 2022 general elections