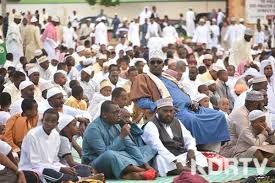 A Kilifi County scholar Muhdhar Ahmed Badawy advised Muslims in Kenya not to take the honor by the Government for granted since many nations with a Muslim majority do not get such recognition by their governments.

“This is a day to send a message to all Muslims, Kenya and the whole world that Islam is a religion of love and peace,’’ Badawy said as he addressed believers at Masjid Al Noor Mosque in Malindi

Idd-ul-Adha, also known as Idd-Ul-Hajj (the feast of slaughtering), is celebrated to mark the end of the pilgrimage to Mecca. The holiday takes place on the 10th day of the third month after Ramadhan and revolves around activities of Abraham and his son.

Mahsen Shariff Albeity who is in charge of Masjid Al Noor Mosque in Malindi also thanked the president for honoring the Muslims and asked wished him long life for recognizing the Muslims.

“We urge Muslims to sacrifice today and share it among the people regardless of their religious background,’’ he said.