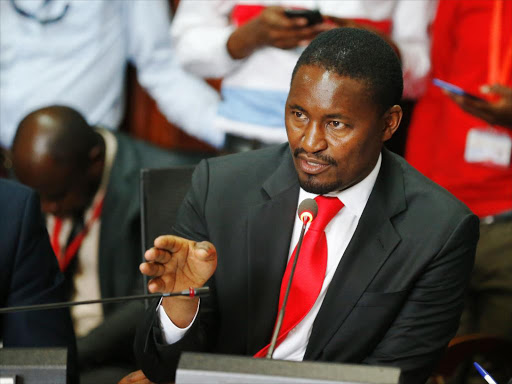 Former Cabinet Secretary and TSP party leader Mwangi Kiunjuri over the weekend called out several fellow politicians for allegedly abandoning him when he needed them most.

Speaking during the burial of his nephew Gerald Kiunjuri, the former CS went on an emotional rant saying that longtime political allies Laikipia Senator John Kinyua and Laikipia West MP Patrick Mariru no longer speak to him despite his great input in their career.

According to Kiunjuri, he helped the two, even fed them, while they were trying to make a name in the politics only for them to start avoiding him.

“Today two people surprised me, Senator John Kinyua, who I put in my vehicle in 2013 taking him all round in Laikipia. He was broke and my wife fed him for three months, yet up to now not even a message of condolences has he sent to me and my family. Not even a WhatsApp message,” he said during the funeral.

READ ALSO: Jalangó Finally Shares Amount Of Money His Campaign Will Cost, Plans To Change His Name To Win Votes

“Laikipia West MP Mariru also has not sent me any condolence not or anything of the sort all I want to say before the church is that I have never wronged either of the two and whatever I have said about the two is the only thing I will ever say about them and may God redeem them.”

Kiunjuri went on to reveal how he helped the two successfully join politics.

“During the past election period, I called both of them for a six-hour meeting explaining to them that if they went for the same position, they would lose so I advised one to vie for the senatorial position and the other to vie for the MP post,” Kiunjuri claimed.

The former CS 29-year old nephew is reported to have taken his life while facing mental health challenges.