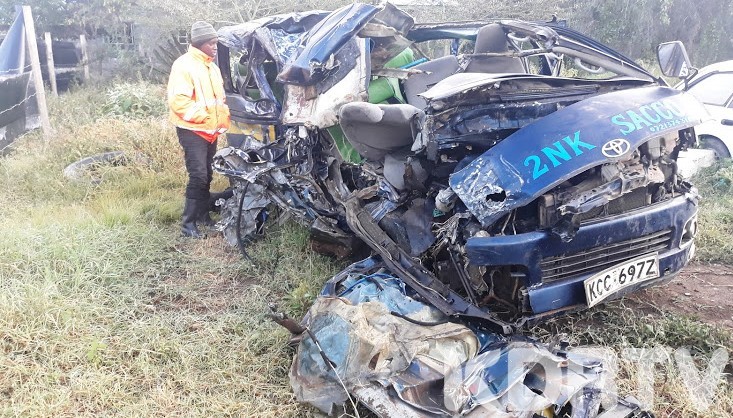 A brutal road accident involving a Nissan matatu and a truck has claimed the lives of six people and seriously injured nine others at the wee hours of Saturday night.

The accident took place 15 kilometers out of Naivasha town where the truck hit an oncoming matatu killing five people on the spot.

One person however died while receiving treatment and nine others were left in very critical conditions at Naivasha Referral Hospital.

The Chairman for Naivasha Road Safety Association James Kabono affirmed the happening of the incident after visiting the scene and added that the truck driver was the one to be blamed, although he died on the spot.

“The truck driver left his lane while overtaking a fleet of vehicles and lost touch hence colliding with the oncoming matatu. He however died on the spot,” said Kabono.

It is believed that the passengers in the matatu were heading to Nairobi while the truck was heading to Naivasha transporting cargo.

Within the past one year, deaths by accidents had hugely increased, especially along Nakuru-Naivasha Highway.

Various plans and measures had been put up to curb the menace, although majority of drivers are to be blamed for failure to observe traffic rules.

Naivasha Deputy OCPD urged drivers to be very careful while driving at night, and insisted that traffic regulations need to be followed in all times, day and night.

He confirmed the death of the six passengers together with the other nine that were receiving treatment.

“It is another sad day as six people have yet been lost to an accident that could have been avoided. It is high time traffic officers contain speeding drivers and have them charged heavily,” said Deputy OCPD, John Kwasa.

Traffic was paralyzed for a few hours in the area as the police worked on towing away the wrecked vehicles.