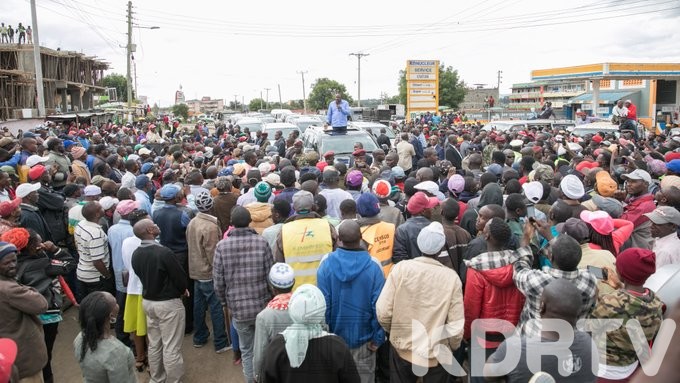 (KDRTV) – President Uhuru Kenyatta started an aggressive tour of his Mt Kenya backyard to destroy the inroads made by his deputy William Ruto.

It is believed that Central Kenya people are restless after being sidelined by the Jubilee Government and are contemplating supporting Ruto in the 2022 elections. Uhuru has formed an alliance with ODM leader Raila Odinga, and though both men have claimed that 2022 is not part of their deal, their actions speak otherwise.

Uhuru’s trips to Nakuru, Nyandarua and Kirinyaga counties have not just been political rallies. He has delivered massive goodies to the locals.

Here is what Central Kenya has so far benefited from the President’s tours.

1.Four roads to be tarmacked in Nyandarua county.

2 Uhuru commissioned the construction of a Ksh 250m milk cooling plant in Meru on Saturday. He also announced plans to construct a milk Processing plant to add value addition.

1/4 President Uhuru Kenyatta today launched the construction of a Shs 250 million milk cooling plant in Meru County with an assurance that his government will not dither in its efforts to improve the welfare of farmers. pic.twitter.com/jGedSUYBh9

3. Last month Uhuru ordered that Ksh 500m be given to the New Kenya Cremaries Commission to start buying milk from farmers at the cost of Ksh 35 per Litre. This was up from Ksh 17.

4. On Saturday, Uhuru ordered that farmers in Mwea should sell their rice at Ksh 85 per Kilogram. All government institutions were directed to buy locally produced rice. He told the farmers that subsidized fertilizer will be delivered to them directly. He also promised to construct an adding value to rice factory in Kirinyaga.

President Kenyatta has assured of the Government’s commitment to address challenges facing farmers countrywide. Speaking on the rice sector, the President directed government institutions to buy only locally produced rice so that farmers reap maximum returns from their hard work. pic.twitter.com/IOZw7pULpz

5. A government task force will be set to look on the issue of Tea and coffee and revive the boards to serve “Kenyans”

6. Some feeder roads will be constructed in Kirinyaga to help farmers transport their produce in time.


President Uhuru Kenyatta today led the groundbreaking ceremony for the construction of a potato cold storage and processing facility at Ol'Kalou in Nyandarua County. The facility will assist farmers to add value to their potatoes and help create jobs for the youth in the region. pic.twitter.com/RnFPpjT3Ti

The goodies may increase in the coming days since Uhuru has not visited other parts of Central Kenya, especially his Kiambu backyard.

While in Nyandarua, Uhuru told residents that he will no longer sent anyone to represent him because they had lied to him.

“I no longer trust anyone…Those I used to send to represent me to ensure that development projects are on the right track started behaving like hyenas and doing their own things to enrich themselves,” he said.

We hope he will visit the other parts of the country.