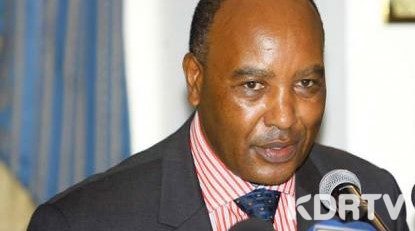 The Governor had initially held a meeting to review the performances of different sectors over the last two years, where it arose that the four had under-performed.

Governor Kimemia then went ahead and sacked the officials at midnight by the county headquarters.

These officials are Simon Ng’ang’a who is the committee member in charge of water, tourism and natural resources, the Trade and Cooperatives Executive Muthoni Wamuiya, ICT and Public Administration’s Kariuki Mbataru and finally Faith Mbugua of Education and Social Services.

A statement sent to the media explained the reason for the sacking which was to enhance service delivery and development.

Governor Kimemia cited that the four had performed poorly after the review and change was necessary to introduce progress.

Ideally, the ICT and Public Administration Committee was facing an impeachment motion based on misconduct in office and had sorted the aid of the court to stop the impeachment.

“As the two-year contract term for my county executive committee members nears completion, it has become necessary to reinvigorate my transformation agenda through injection of new strategic competences for optical performance and accountability to the citizenry,” read the statement.

Although the sacked executives have already been replaced by a new batch of appointed ones, most people linked the sacking to the politics of 2022.

One of the committee members attributed the governor’s actions to have been swayed by the affiliations of 2022 politics, where it was necessary to have his loyal supporters by his side.

This comes after Nairobi’s Governor Mike Sonko had threatened to sack his executives based on disloyalty and poor conducts in office.

The Governor had through a Facebook rant threatened to show the executives the door because they were making serious decisions without involving him.

At the same time, they were accused of keeping important matters that affected residents of Nairobi to themselves and protecting their personal interests.

Devolution brought about County Governors as the bosses of the County, able to fire and appoint executives based on valid reasons.

Therefore, although Nyandarua’s Governor Francis Kimemia cited poor performances, there are still hidden agendas and reasons that could have played a part in the strange move.