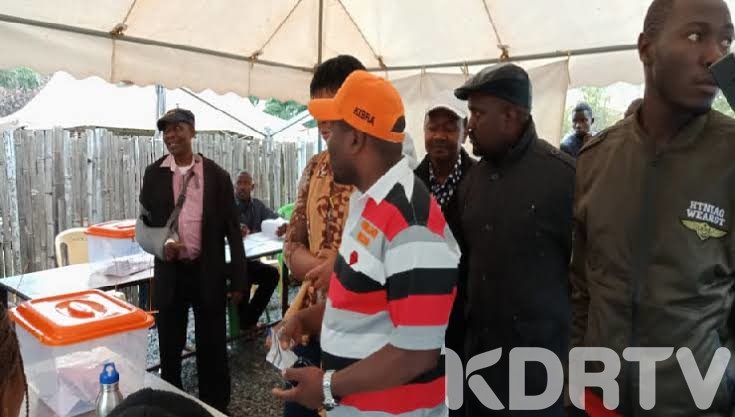 The D-day for ODM in Kibra has finally arrived encumbered with dull weather and a low turnout of people.

The flag bearer for the ODM candidate is to be unveiled as the nomination elections kick off in a bid to replace the Late Ken Okoth who succumbed to cancer.

The list of nominees has been hit with a decrease in number as some of the names that had been front lined in the beginning were nowhere to be found.

“The voting process started quite late with low turnout of people. The stations will be closed at 5.00PM and the votes will be counted before transmitting to the tallying center where the winner will finally be announced,” said an official.

The winner in the nominations will embattle it out with other candidates including McDonald Mariga of Jubilee party and Eliud Owallo for ANC.

Although the voting process has moved smoothly, there were challenges of missing names while other residents demanded the IEBC list to confirm their names.

The Kibra By-election is a very tough race not only for the aspirants but also for the party leaders, a supremacy battle to reflect on the 2022 elections.

The Late MP Okoth was from the ODM party, and as it has been done before, the jubilee party through their party leader Uhuru Kenyatta withdrew their candidate to pave way for ODM in accordance to the handshake.

READ ALSO: ODM Party Rules Out Possibility Of Direct Nomination, Assures Supporters Nominations Must Be Carried Out In Kibra

However, the process was met by a rude shock after ANC under Musalia Mudavadi declared their interest and fielded their candidate together with Jubilee, hence clashing with the Presidents directive.

The same is aimed to put to an end the territorial marking of Kibra, which has been long enough known to be Raila Odinga’s strong hold.

For instance, Donald Mariga is alleged to have been fueled by DP William Ruto to challenge Odinga and dethrone him from his territory.

The party ruled out direct ticket nominations and promised its people an equal share, however, there are certain members who are believed to be “baba’s” favorites.

Christopher Odhiambo for instance staged a dramatic move by kneeling before Raila Odinga and requesting him to name him as the flag bearer.

“I have heard that there are many young men in Parliament fighting Baba, allow me as their fellow youth to go fight them in there,” Kriss said.