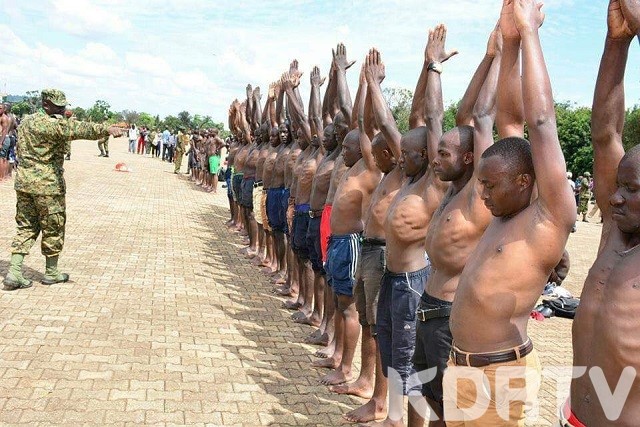 In the statement by the authorities, the Kenyan nationals included men and women and were seized on Monday, December 30, in the Sipi sub-region where the exercise was being held, reported Daily monitor.

“We only identified them here after we were tipped off by some concerned citizens. Indeed as we went deep we found that they were not Ugandans, about 40 of them were eliminated on that fact,” said Telesphor Turyamanya, the regional military spokesperson.

However, Turyamanya expressed he worries stating that even after they managed to identify the Kenyans and blocked them from the exercise, the majority of them had secured required documents including letters of recommendation from local administrators

“Imagine some of these Kenyans were actually recommended by administrators and we only identified them here after we were tipped off by some concerned citizens,” he said.

KDRTV confirmed that also eliminated during the workout were Ugandan nationals on the basis that they were unfit, late, or presenting fake academic qualifications and forged identity cards among other vast reasons.

For and individual to join the Ugandan military, he or she must be a Ugandan citizen with an original National Identity card alongside recommendation letter from the local administrators

The ongoing Ugandan exercise that lasts for 10 days is aimed at recruiting a total of 4000 youths from all districts of the country and would serve as professional or regular soldiers.