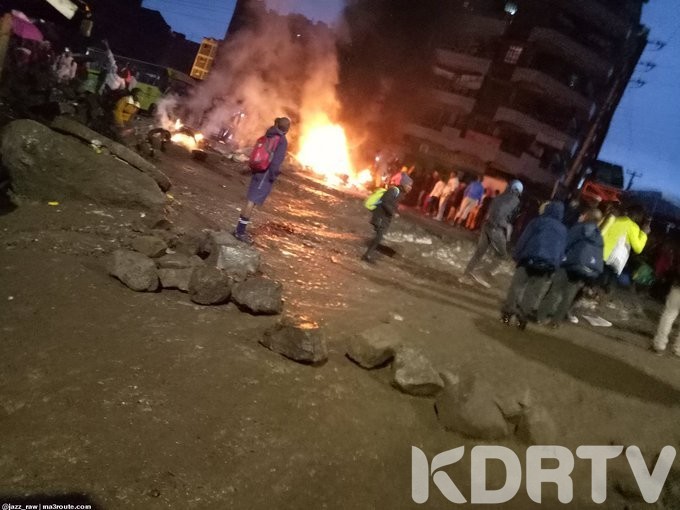 KDRTV- Thousands of Nairobi commuters were left stranded on Monday morning after the Kasarani-CBD Matatu operators demonstrated over poor roads in the area.

According to reports on social media, the operators barricaded the road with burning tyres and even personal vehicles were not allowed to use the road.

Commuters had to brave the heavy rains as they walked to Roysambu to seek alternative means to reach Nairobi CBD.

From pictures shared on social media, the Mwiki-Kasarani route is in poor condition and when some parts of the road turn into ponds.

The road has large potholes and poor drainage. Despite serving thousands of Nairobi taxpayers, some parts of the road can easily be turned into fertile land. Due to the poor road, public transport vehicles charge Ksh 100 for a trip to the CBD during normal days. The fare can double during the rainy

Very little has been done by area MP Mercy Gakuya since she was elected in 2017. In fact, locals say the last time they saw her was during her last campaign rally before the elections.

The worst morning this year, huyo kasarani Mp should stop telling us yeye si wa national government atengeneze barabara,have i seen her talk in parliament even once,sasa nikipata pneumonia ntaambia nn watu…jubilee Mps ni scam how did we end up with this one!