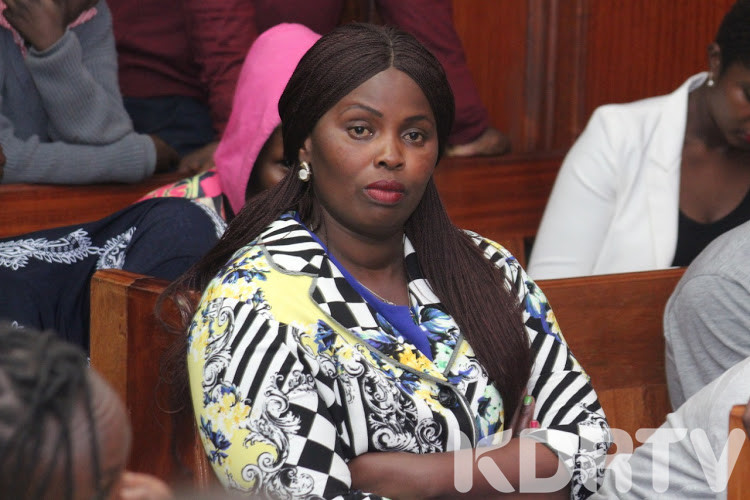 Ngirita was speaking outside the courtroom where she was accompanied by her lawyer. She narrated how her family has been suffering since her bank account was frozen in December 2018

According to her, the Director of Criminal Investigations (DCI) was exercising double standards in the NYS scam case.

In her viewpoint, the DCI wanted to oppress her family when other suspects are walking freely. She thus wanted the President to intervene in the NYS case.

“We the Ngiritas have been persecuted for about two years now. We have been sacrificed at the expense of the people who could be the real culprits. Where are other people who were mentioned in the NYS scandals? It has always been us. Where are the nine billion they claim we stole?

I beg the President to request the list of NYS scam suspects. There were very many people who were in it yet it is just Ngirita’s who are always on the chopping board,” Ngirita said as she unsuccessfully wrestled tears.

According to our previous story, Ngirita had requested the court to allow her to withdraw Ksh. 800, 000 to pay as school fees for her children.

The court had since not respected her request despite her claims that the money in her account was a loan extended to her.

Ngirita alleged that the unpaid dues of over Ksh. 3.4 million at the Pembroke House School in Gilgil, have seen her son chased out of the school and now at a higher risk of becoming a street urchin

“My son is now unable to communicate in German. He can only speak Swahili, English and Gikuyu. He is almost becoming a chokoraa (street urchin). I am now supposed to go back with him at home aboard a matatu.

This is heartbreaking, especially when I remember my vehicle, which I purchased on credit, is collecting dust at Naivasha police station,” she added as she broke into screams interjected by complaints in her vernacular language.

Ngirita is among the suspects who were accused of defrauding the NYS in a scandal that saw Kenyans lose millions of shillings.