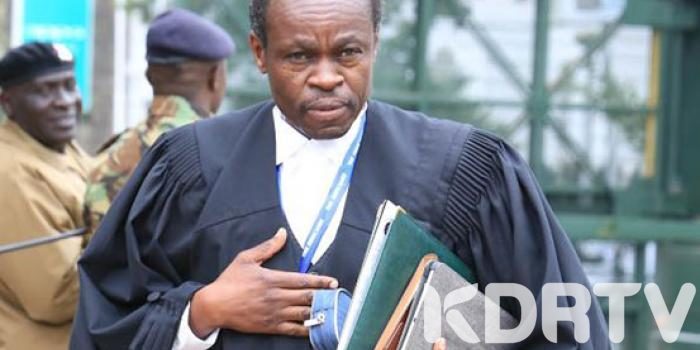 (KDRTV) – Renown lawyer Patrick Lumumba, popularly known as PLO Lumumba, is repsenting the two suspects of Saturday’s shooting at a house in Kilimani Estate in which a man died.

Kelvin Omwenga was fatally shot under unclear circumstances in the bedroom of his apartment at Galana Suites on Saturday night. Detectives have arrested businessman Chris Obure and his bodyguard Robert Bodo over the shooting.

….the Kil in Kilimani is making sense same stories.

Bodo has already admitted to shooting Omwenga, though he told detectives that it was an accidental incident as the two men fought over a gun in the bedroom. The gun, a ceska pistol, is registered to Mr Obure who is a licensed gun holder.

The two suspects appeared before Kibra law courts on Monday where the prosecution asked to be allowed to detain them for 14 more days to conclude investigations.

“The firearm belongs to Mr Obure, a licensed firearm holder and it became a mystery how Mr Ouko had it. The suspects’ release could lead to interference with the investigation,”  the case investigator Sergeant Bashir Boya,  told Kibera Principal Magistrate Derrick Kuto.

The prosecution also revealed that they are yet to record witness statements and were awaiting an autopsy report which was conducted on Monday afternoon.

However, PLO Lumumba, arguing for the suspects, opposed the application to detain his clients saying all the crucial evidence including CCTV footage and the firearm are already in police custody.

He also revealed that his clients had complied with the investigation team and had presented themselves to Kilimani police station.

“It is right of an arrested person to be released on bond or bail,”  Prof Lumumba told the court.

The magistrate, will today, rule on whether to allow police hold the suspects for 14 days or release them on bail.