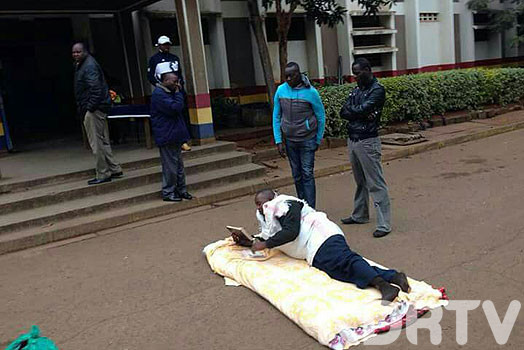 A police officer was on Friday morning arrested for assaulting a female colleague inside Langata Police Station.

Mr Fredrick Mulili Nzioka who is attached to Khalalo Patrol Base in Mandera was arrested at Lang’ata Police Station where he is currently being detained.

In a police report seen by KDRTV, Mr Nzioka is said to have assaulted Ms Emily Makena Kathoka who resides inside the Lang’ata Police Station.

Other offences that he committed include; Malicious damage to Government property by breaking the door hand locks of house number D block 14.

“The officer had been restrained on several occasions but keeps threatening that he would kill the complainant who is his ex-girlfriend,” the report read in part.

Cases of police officers breaking the law have been on the increase in the recent past.

On Tuesday, a police officer identified as Mohammed Sirat attached to Gigiri Police Station was nabbed by his colleagues for taking a bribe.

On Wednesday another officer known as Jeminsta Mutua 40, committed suicide after killing his lover her lover Joyce Miange.

Mr Mutua, is said to have strangled his lover before he consumed poison.