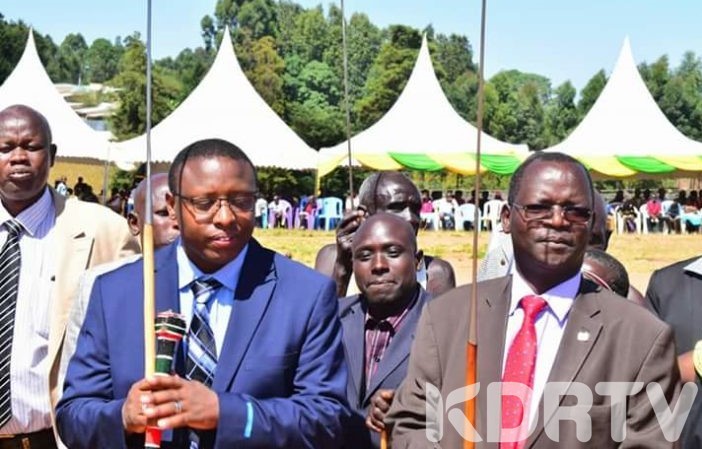 West Pokot Governor Dr. Nicholas Owon Atudonyang is one of the public servants enjoying a monthly salary without having to work for it.

The Deputy Governor has been based in the US for two years in a row since elected, pursuing and putting his medicine degree to practice.

A section of leaders have come out to condemn his mode of work, urging him to make a choice between Kenya and the US.

“The Deputy Governor is busy working and practicing family medicine in the US while earning a salary while his people are languishing in poverty. He does not deserve pay, he should make a choice of serving Kenyans or living in the US,” said a vocal renowned politician.

The West Pokot Governor John Lonyangapuo however sees nothing wrong with the DP serving while in a different state.

According to him, the obligations by the constitution is to have a Deputy Governor something that was accomplished after he was elected and sworn in.

Ideally, the Governor defended his deputy claiming that he was not getting the salaries and allowances stipulated for his role, hence he is not doing anything unconstitutional.

Early in the year, some residents demonstrated against his absence in the projects and developments within the region. They termed his absence as morally wrong, insisting that he needed to resign since he was not delivering what he was elected for.

“West Pokot needs leaders that are energetic and ever present to hear the peoples’ grievances and address them by having their presence here. The Deputy Governor since elected has never represented any of the agendas they campaigned for. He should step down and another person given the seat to handle the county matters,” said a resident.

Nairobi County is also on the spot for operating without a Deputy Governor.

Ever since in almost a year now, the Country’s Capital has been managed without the DP Governor and although Sonko attempted to appoint and nominate a few members, the process was unsuccessful.

He even appointed the controversial Miguna Miguna who was deported due to citizenship issues, a move that was greatly opposed.

The constitution does not outline the necessities of appointing a Deputy Governor in case of resignation or any other failure.

This hence is the reason as to why Governor Lonyangapuo of West Pokot is in no hurry to fire or have his DP resign.

However, when leaders are elected, they are meant to meet the represent the peoples’ grievances and be present to meet them.

This is not the case in the two counties as they are run without the DP governors.