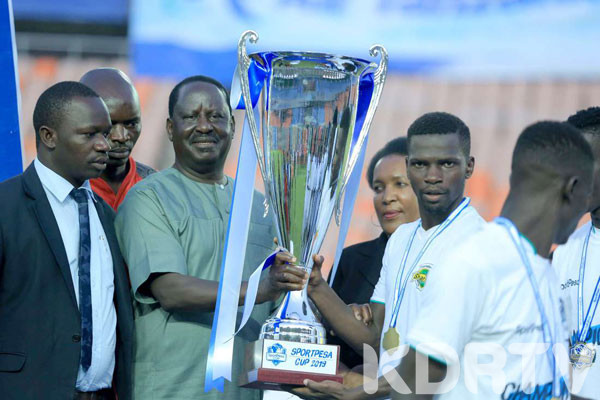 (KDRTV) – ODM leader Raila Odinga has blasted the government for shutting down betting firms, claiming the move has affected sports in Kenya.

The AU envoy claimed that some football teams will soon close shop after missing out on the millions they were receiving from giant betting firm Sportpesa.

“Sportpesa was helping some of the sports clubs with sponsorship, it is not happening anymore and some of these clubs might just have to fold up,” Raila said during an interview on NTV.

Raila says when he shook hands with President Uhuru, he denounced the oath he had took as the ‘People’s president’. ~ Raila #RailaSpeaks @Warungu pic.twitter.com/GYhFJsfUYo

Sportpesa exited the Kenyan market in September 2019, protesting the government’s decision to impose a 20% withholding tax on all bets placed.

“Sportpesa is disappointed with the decision by the Kenyan legislature to impose a 20% excise tax on all betting stakes. The tax is based on a fundamental misunderstanding by the Rotich led treasury of how revenue generation works in the bookmaker industry,” read the statement in part.

It added; “Until such time that adequate taxation and non-hostile regulatory environment is returned, the SportPesa brand will halt operations in Kenya.”

The firm was the official title sponsor of the Kenya Premier League. It also sponsored Gor Mahia and AFC Leopards. The league has struggled this season over lack of funds with some teams forced to give walk-overs.

“I go through pain. I have been with this title for four years. Nobody has assisted me apart from SportPesa. Since SportPesa left, nobody helps me. The government has abandoned me. I’d rather the Mexican wins this fight because the Mexican government supports sports and athletes,” she said.