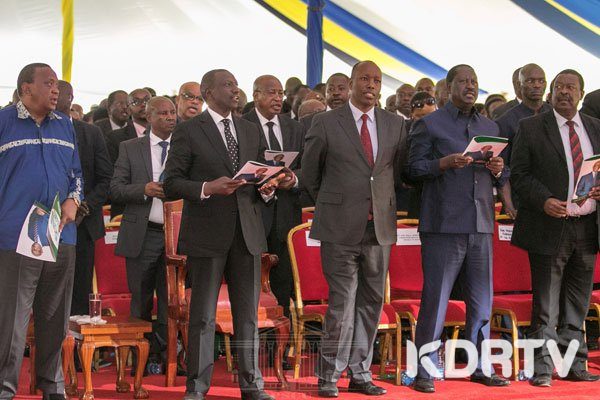 ODM leader Raila Odinga continued with his onslaught against DP William Ruto this afternoon by throwing subliminal shots at the DP in presence of President Uhuru Kenyatta at at Mangu-Rongai village in Nakuru County . The three leaders shared a podium during the burial of late lawyer Karanja Kabage. 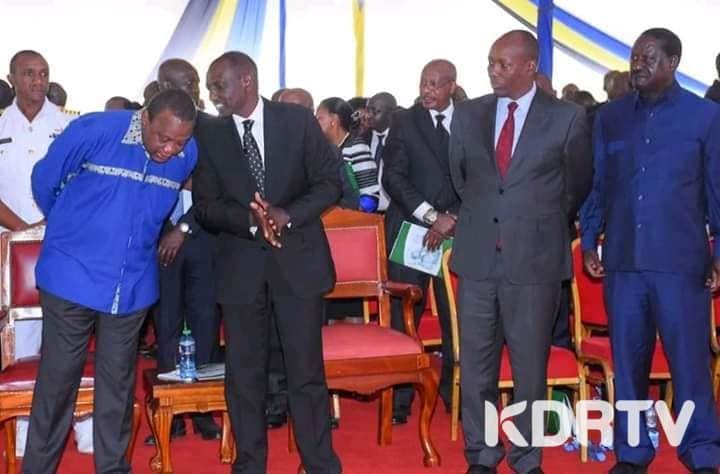 While speaking at the burial, Odinga eulogized the late tycoon as a ‘real hustler’ who lived a life free of corruption and had straight ways in his activities, by carrying out himself  with integrity.DP William Ruto has always branded himself as a hustler and Raila’s remarks was a direct shot at the DP.

Raila also called the late Kabaje a patriotic man who always loved the people and his country.Adding that he educated many young men from his community.

“He helped many young people get educated. He was an expert in nuclear energy; he came to my office when I was a minister for energy and we discussed a lot about nuclear power. Karanja was a real hustler because he even went back to university. He was against tenderpreneurs and fought to end corruption. He was a true Kenyan patriot.” Raila further added that the deceased always preferred to conduct business the right way. 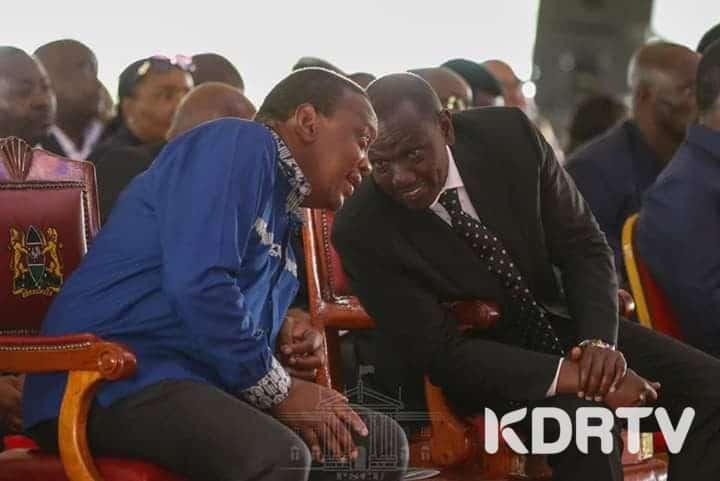 On his part, President Uhuru Kenyatta remembered Mr Kabaje as a full patriot who was as determined and persistent in matters development and that he followed up on projects such as road construction.

“He was a full patriot. We are here to bury a hero for this country; a person who devoted himself to changing lives and our country through his numerous sectors including the insurance sector. We can say without fear that he worked hard to earn his living but also ran several initiatives that touched on the lives of Kenyans,” Mr Kenyatta said.

“The only [way to show] respect is to imitate him. We should not look at ourselves but at the people. If you are a politician, [look at the people]. If we commit ourselves to that, we shall progress. Let us love each other as Kenyans. We should end tribalism so that we can  progress”.

DP William Ruto on the other hand said he met the late lawyer during his days with the YK 92, where he was inspired with his entrepreneurial spirit.

”“In 1993 I met him running a very successful insurance brokerage firm. He inspired us to start an insurance firm and progressively we followed his steps.He was a great mentor. I can attest to his integrity. We are burying a man who made great strides in driving this country forward,” he said.

Don’t leave without Sharing on Facebook and Whatsapp below!