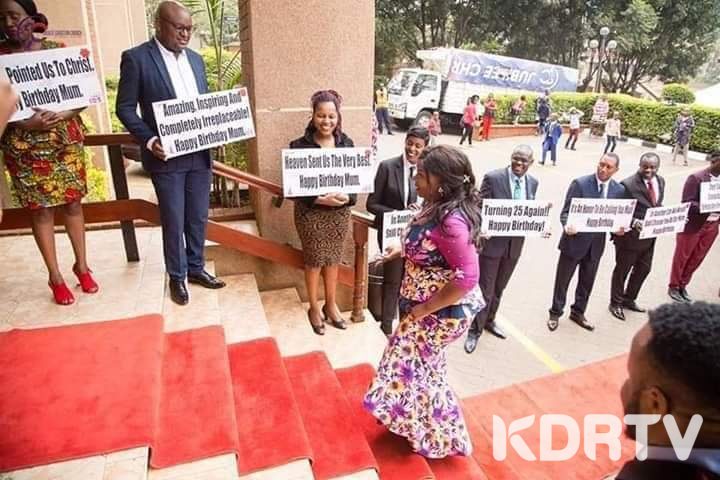 A prominent preacher’s birthday celebrated in style by her church members has left Kenyans and social media users in utter shock due to the extravagance.

Reverend Kathy Kiuna who owns the JCC church together with her husband Allan Kiuna yesterday was welcomed to a reception like no other in commemoration of her birthday.

Going by the pictures and videos shared on social media, the flamboyant reverend was offered and treated to a very warm reception and a blessed with Land cruiser V8 as a birthday gift.

The ceremony began by ushering her out of her vehicle encumbered by a group of people singing and ululating singing her praise.

At the same time, some of her church members were holding placards in the air decorated with sweet messages and appreciations for the roles she played in the lives.

Some called her ‘mom’ which did not go well with majority of social media users.

One Facebook user commented on the images relating the actions of the church members to slavery and being brain washed.

Ideally, some of the men in the pictures were dragged and thrown to all sorts of insults asking them to go and look for their mothers and build them homes before worshiping a preacher and calling her ‘mom’.

The reverend is very flamboyant and known for having the best things in life and living large.

She is very prominent and majority of her supporters and church members praise her for her preaching skills and calling the spade a spade.

At one time she was also on the receiving end of social media users after she made a statement that differentiated between the rich and poor, citing her church as open to the rich people only.

However, she links her wealth and riches to God and ushered her birthday in style and added another year to her life in the most unique way.