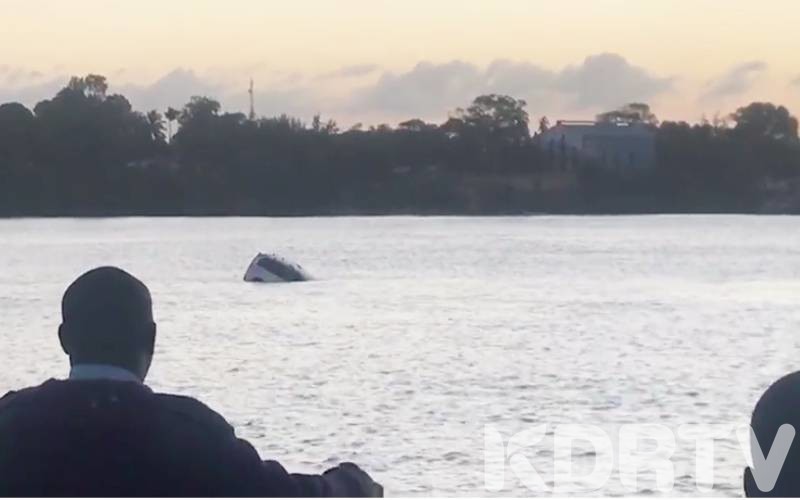 A saloon car on Sunday plunged into the Indian Ocean in what was seen as an accident, with four occupants on board.

Among the occupants are believed to be a woman and a minor, with the other two still unclear.

In a video that surfaced online, it is believed that the saloon car slide into the ocean, although investigations are still underway to find the cause of the accident.

According to the police, the woman had tried to access the ferry through the wrong entrance from the mainland side, and being the last vehicle to get in the ferry, it was in the far end.

The woman then allegedly tried to reverse before the vehicle lost focus and slide through the ocean.

” I saw a woman and a boy who started screaming and asking for help immediately the car slide and plunged into the ocean. I threw a life saver on them but nothing could be done,” said Majiwa who was also in the ferry.

Members of the public however expressed their disappointment in the marine services since there were little or no means of fast rescue to save the occupants of the vehicle.

From the video, the car slide and stayed on water for a few seconds before being submerged deeply.

Through out the time, there were no present speed boats or rescuers on the side to come to the rescue of the family.

“It is a sad state to loose lives in such a horrific manner. I saw the whole incident from the beginning and i must say something could have been done if the rescue mission was prompt,” said an onlooker.

Several people including a young child are feared dead after their saloon car slid into the Indian Ocean while being transported in a ferry in Likoni, Mombasa county. https://t.co/5QS373W35Z #tukonews #LikoniFerry

Ideally, some questions were raised regarding the safety measures on the ferry, since there is supposed to be a ramp that prevents vehicles or other occupants of the ferry from falling out or sliding, or rather, some heavy cargo need to be tied up for safety.

According to Likoni Sub-county Police Commander Benjamin Rotich, there were four occupants in the vehicle, and  the journey was started on a bad note after having an altercation with the Kenya Ferry Officials.

Rotich sent his condolences to the family adding that more rescuers would be deployed for the operation the following day.

Nairobi Governor Mike Sonko sent his condolences to the family, adding that such accidents should be avoided and passengers protected under good safety measures.