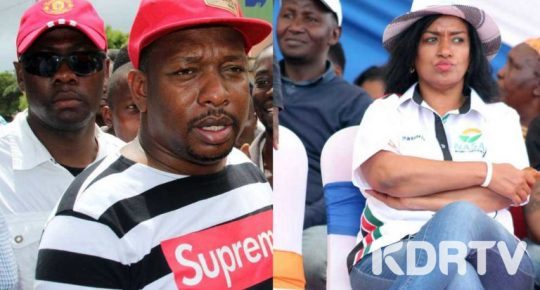 Last month the social media broke loose after an ugly fight and exchange of words by Nairobi Governor Mike Sonko and the Women Rep Esther Passaris during Madaraka Day.

Today, they shared a podium for the first time while attending  President Uhuru’s event and it looks like they buried the hatchet.

They were spotted seated together and whispering in each other’s ears during the inauguration of KCC Dandora Factory to mark Ushirika Day.

During  Madaraka Day, a war of words ensued that saw Passaris leave the event angrily before it was complete.

Passaris has complained of being left out on County development and lack of support from the governor while Sonko retreated by attacking her family and personal life.

The war was further taken to social media with different people showing support to different groups.

For instance, women leaders were in support of Passaris together with Kenyan Feminists terming Sonko’s rants as disrespectful and an indication of disregard for women.

Sonko was under fire with some leaders attacking his behavior as unprofessional and even wanting him to step down.

He was given an ultimatum to apologize and take back his words, with the woman Rep threatening for a lawsuit but the governor failed to heed the calls.

In an attempt to clear his name and explain the reasons for his outburst, he was called for an interview in one of the Nation’s largest media houses.

The interview was later halted and the governor asked to leave because of the standards and policy of the organization.

Going by the body language at today’s event, there are possibilities that the two leaders have buried the hatchet and opted to working together for the benefit of the County.