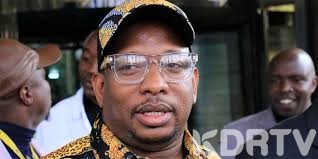 Nairobi Governor Mike Sonko has pledged to put his tools aside if found culpable of ongoing graft at City Hall.

The Governor had earlier been summoned by the Kenya Revenue Authority regarding payments made to 13 firms on garbage collection and disposal.

He was accused of making illegal payments to firms that were not in existence hence embezzlement.

However, he defended himself against the accusations and blamed his administration for the misappropriation of the said funds.

Sonko said that his administration are the people who should be implicated and should answer the charged at a personal level.

Sonko after being grilled and questioned by the taxman, managed to prove his innocence by vowing to step down until investigations were completed regarding the misappropriation of funds.

“We must sustain the fight against corruption and graft. I cannot purport to remain in office if found guilty of all these accusations. I will step down if found guilty and carry the cross by President Uhuru of fighting and ending corruption,” said Sonko.

Sonko is one of the most vocal politicians, who has risen to fame due to his dramatics and no nonsense nature.

Often at times he has been in trouble for being too vocal and having caused other legislatures serious pains by going beyond his role.

From flamboyant lifestyles of driving the best cars, wearing expensive jewelry and acting rogue, the governor has displayed all form of theatrics in office.

He has sacked his juniors in the most displeasing ways and threatened to take actions against anyone who spread anything about him.

He had it rough on Madaraka day after unleashing venom on Nairobi’s woman Rep Esther Passaris, an action that had him criticized for his work ethics and how he runs the capital city.

Sonko’s Deputy resigned months ago on allegations of frustrations by him hindering work development.

Since, the governor has been unsuccessful in appointing a person to deputize him and has been running City hall and the city at his own terms.

The county bosses have been summoned by @KRACare shed more light over taxes deducted from county employees but never remitted to KRA. #tukonews https://t.co/sGgEXRl4lf

Majority of Kenyans questioned Sonko’s lifestyle as he is known to be a very wealthy man, dishing money right left and center.

In the past he disputed any claims of drug dealing and corruption, insisting that his money was legit and hard earned.

In a most recent confrontation, Sonko fell into all forms of controversies after unleashing a ‘mpango wa kando’ secret during the late Kibra MP Ken Okoth’s burial.

He was criticized for taking that role since it wasn’t his place but however managed to stand firm on it and initiating groups to fight for single mothers suffering at the expensive of legislatures.

Ethics and Anti-Corruption Commission detectives claim that some of the firms that won the Sh357 million tender wired more than Sh20 million to Sonko’s bank accounts https://t.co/6mY6etPDvB

The tax man has finally knocked on Sonko’s door on graft allegations, it is only a matter of time that the DPP and the DCI will be on his tail, then what? Since he has no deputy, who will take charge of Nairobi!