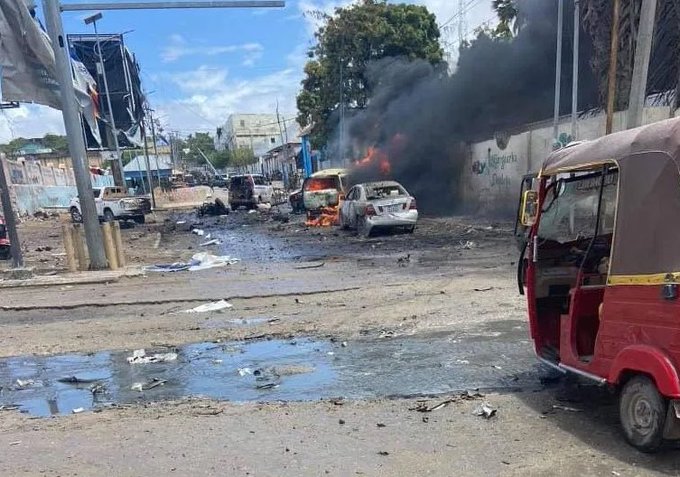 KDRTV NEWS: At least seven people have been killed in the Mogadishu car bomb attack near the presidential palace on Sartuday.

Militant group Al-Shabaab has claimed responsibility for the attack.

The Al-Shabaab claimed responsibility for the attack in a brief statement they made.

Reports indicate that the suicide bomb attack in Somalia`s capital was targeting the convoy headed to the presidential palace as it waited in the security checkpoint.

The security usually stops convoys entering the palace for the security check.

Witnesses said that the bomb was detonated when the police stopped the driver from performing a security check.

“They normally stop to check and clear vehicles before they can pass by the checkpoint. This car was stopped by the security guards and it went off while there were several other cars and people passing by the nearby road. I saw wounded and dead people being carried,” said an eyewitness.

According to the witnesses, seven cars and three rickshaws were destroyed.

The attack near the palace occurred just after hours after another bomb was detonated near the military headquarters in Mogadishu, which left no casualties.

The international community has faulted the politicians for the deteriorating security in the country and the delayed elections.

The tension between the prime minister and the President has also mounted tensions in the besieged country.

Al-Shabaab has carried out some of the deadliest attacks in the country that had compelled the international community to send troops to the country.