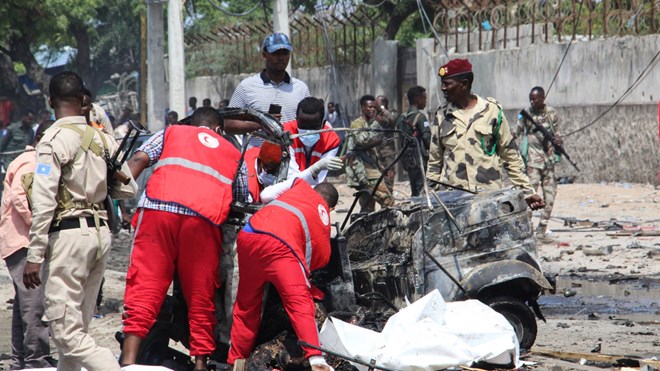 KDRTV NEWS: Three officers among those killed as dozens sustain severe injuries during a suicide bomb attack in Mogadishu, Somalia.

The attacker detonated a device inside a cafe in the Somalia capital Mogadishu, statements by the police and witness reveals.

The suicide bomber bestowed target on the tea shop near a crowded junction with many members of the Somalia security forces as well as the civilians.

The Alshabaab claimed the deadly attack through the Shahada News Agency.

The flying debris outside the cafe killed two members of the Somalia security team while injuring five civilians.

“Pieces of metal and destroyed plastic seats were strewn around the whole area,” said Abdukadir Sagaalle, an eyewitnes

Contrary to the police reports claiming that only two people have died, a statement issued by the terrorists indicates that they killed 17 people and maimed several others.

However. KDRTV can not confirm the Al-Shabaab exaggerated figures.

The Al-Shabaab which is battling to overthrow Somalia`s internationally-backed government has been frequently targeting security personal and civilians in Mogadishu which is the capital of Somalia.

Last time, the Alshabaab claimed a bomb attack that killed at least 10 people in a tea shop in Mogadishu; many people sustained serious injuries.

The terrorists held the Somlai`s capital until 2011 when they were pushed away by troops from the African Union, however, they still have territories in the countryside.

Despite the deployment of government troops in central and southern Somalia, Alshabaab has been able to strike both government and civilian installations in the heart of Somalia`s capital