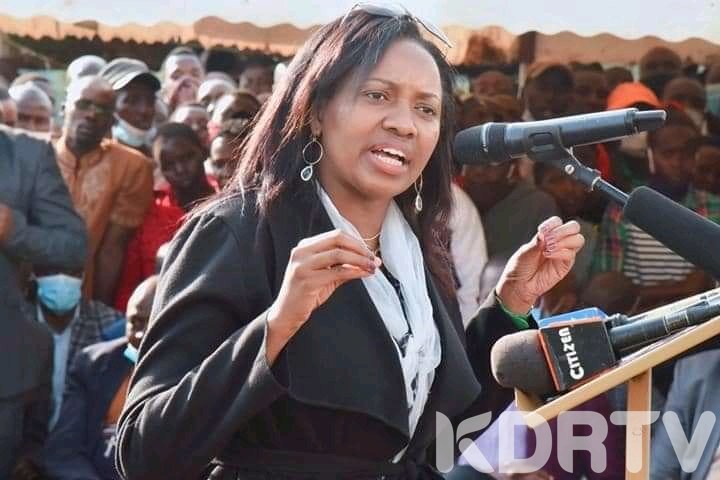 (KDRTV) – Nakuru Senator Susan Kihika has been trending on social media after her speech at a funeral in Nandi County went viral.

Kihika joined thousands of Kenyans for a funeral of three victims of police brutality in Lessos on Thursday.

In her speech, she asked the Kalenjin Community to take action against local MPs who had turned against DP William Ruto’s presidential bid.

She urged the community to ensure that Nandi EAST MP Alfred Keter and his Cherangany counterpart Joshua Kuttuny are not reelected. William Chepkut (Ainabkoi) and Silas Tiren (Moiben) should also pay for their sins.

The fierce Senator asked locals why the rest of the country should be behind Ruto’s Presidential bid when leaders in his own backyard are undermining him.

Susan Kihika, the hypocrite she is, went to Rift valley to ask the people of Rift valley to vote out Alfred Keter, Joshua Kutuny and Tiren for opposing the Deputy President while themselves in central are opposing Uhuru Kenyatta but no one has called for them to be voted out. pic.twitter.com/y53JJzbkft

Interestingly, she was in the backyard of Alfred Keter. Locals cheered her when she made these remarks.

On the issue of police brutality, Kihika warned that Kenyans may burn all police stations if officers continue killing them instead of protecting them.

Police officers killed three residents in Lessos last week. One of the victims was a physically handicapped shoe cobbler who had intervened a situation where an officer was harassing a boda boda rider for not wearing a mask. The officer shot the cobbler at point blank.

These infuriated residents who took to the streets to protest. Police killed the other two victims during the protests.

IPOA is investigating the shootings.