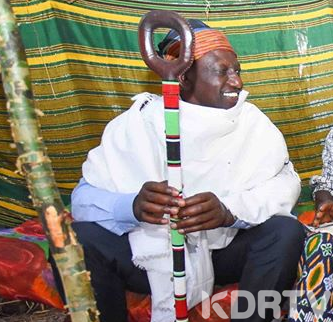 According to Rev. James Baasi who is the chairman of the elders, the Deputy President toured Kapsisiywa village in Nandi county to attend abdication and accession ceremony where he was pronounced the next kingpin to replaced the Late ex-president Daniel Moi.

In the viewpoint of Rev. Baasi, the tradition ceremony took one hour and was anchored on a strong Christian/Biblical symbols and prayers

“According to Kalenjin tradition, one would naturally abdicate the enthronement upon their demise. After Moi’s death, the royal regalia now needed a suitable successor to be handed over to through a legitimate ceremony. Friday’s ceremony was however an abridged version blended with strong Christian/biblical symbols and prayers,” said Rev. Baasi.

However, the chairman stated that the clan is not linked to sorcery and witchcraft as asserted on social media

“We know that the function started very early in the morning according to our culture and this locked many people from attending the ceremony but it is very sad to see people speculate and brand us as sorcerers,” said Baasi.

According to the elders, DP Ruto was adorned with sacred Kalenjin leadership regalia called Sambut, Kuutwet, Sharit and Rungut as well as Kumiat and kalenjin bible