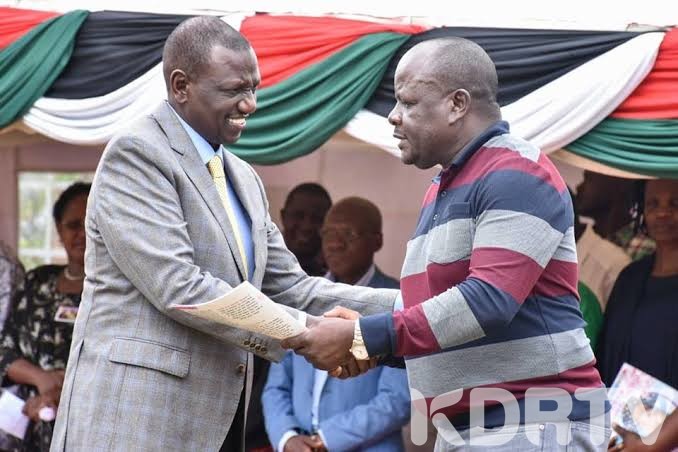 In the clip taken in a sugarcane plantation, the National Assembly Majority Chief Whip is seen kicking and punching the defenseless man with the help of his aides.

Kenyans on Twitter have asked the Directorate of Criminal Investigations (DCI) to arrest and charge Washiali.

This is the reason I can authoritatively say, Benjamin Washiali was never elected. He is a product of Cambridge analytical….. Vifaranga vya computer @DCI_Kenya arrest this man ASAP. pic.twitter.com/BoMmir4kjG

Blogger Robert Alai asked the police to question Washiali’s bodyguard who happens to be an officer.

Hey @NPSOfficial_KE @DCI_Kenya is this attack on a citizen by Mumias East MP Ben Washiali allowed? The MP has a police bodyguard. What did he do? The police officer should be interdicted too. @IG_NPS pic.twitter.com/QPDrlotKfB

When reached for comment, Washiali claimed the clip was taken in 2015 and that the man in question was caught siphoning fuel from a truck in the sugarcane plantation.

In response to this clip of, Benjamin Washiali, Chief whip of the Jubilee party tells @citizentvkenya that "it's an old clip from 2015" and "that the man was caught siphoning fuel from his tractor" pic.twitter.com/dtg6T75LfW

It is not clear why the MP, who is a close friend to Deputy President William Ruto, decided to take the law into his own hands instead of reporting it to the police.

In btw engaging in Public Heist, TangaTanga MPs revel in breaking the law; if not flouting traffic rules, it’s beating up IEBC officials, abusing State Officers & of late beating up fellow “hustlers” as Ben Washiali has done …. Imagine what they will do if they get State House.

Washiali has a reputation of public violence. In 2016, he was caught on camera assaulting Kakamega Governor Wycliffe Oparanya. The incident happened in front of ODM leader Raila Odinga.

Ironically, Mr Washiali is among the Tanga Tanga MPs who complained about the violence meted on their members during the Kibra by-elections in November last year.

Kenyans are now hoping that the DCI will investigate the matter and charge Washiali with assault.

The Jubilee Party should also strip him of his role as the Majority Whip because he is bringing the party to disrepute.