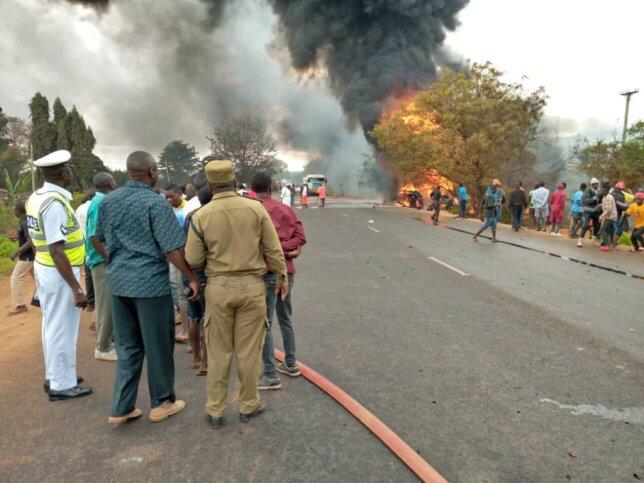 A fuel tanker has exploded in Tanzania killing close to 60 people and leaving many more with serious injuries.

The people in an attempt to siphon fuel, were caught up in flames together with motorbikes and motorists.

According to the Tanzanian government spokesperson Hassan Abbasi, the explosion has left many people wounded and others died on the spot due to severe burn.

‘We are deeply saddened by the reports of the fuel tanker explosion in Mororgoro which has resulted to several deaths and injuries. Our deepest condolences to the families that have lost loved ones and we are doing everything possible to ease the situation,” said Abbasi.

According to reports collected on the ground, the tanker fell and majority of people took the opportunity to collect the fuel that had poured out.

In the process, it caught fire and exploded spreading to all areas with the petrol leakage.

The Tanzania People’s Defense Force (TPDF) were immediately deployed to the scene to put out the fire and save the remaining people that were trapped in the explosion.

This is not the first fuel tanker explosion in East Africa as there was a major one in Kenya where a fuel tanker overturned in Naivasha and killed close to 200 people.

The people had ideally also gathered to siphon fuel before the tragedy occurred spreading to other vehicles that were on the road.

This is a huge tragedy to Tanzanians as the lost lives may rise to a higher death toll.

The authorities had issued a warning against siphoning fuel from crashed tankers as they are very risky.

Ideally, the Red Cross Community in Africa had advocated against that as the end results always turn tragic.

With many of the victims seeking treatment in the nearby hospitals, the fire brigade is containing the spread of the fire and evacuating people to safer places.