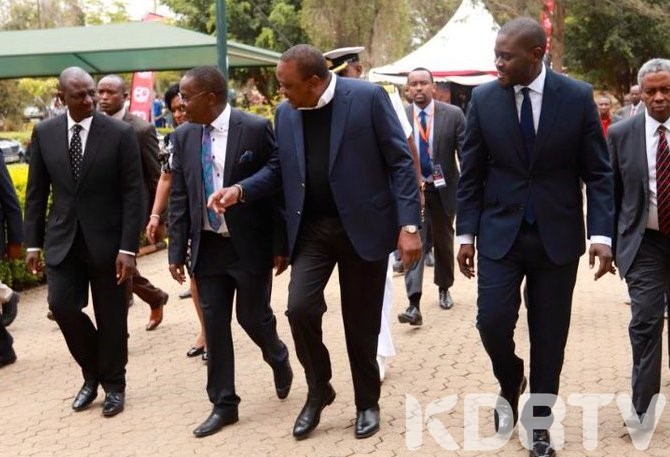 President Uhuru Kenyatta and other Leaders During CITAM 6OTH Anniversary.

President Uhuru Kenyatta on Saturday Morning while gracing CITAM church for their 60 years celebration urged Kenyans to pay tax for continuity and developed.

The President equated himself to Caesar in the Bible adding that he was not going to back down on the war against Kenyans and other companies that fail to correspond to the request.

Caesar in the Bible was the tax collector and emperor who was pictured as a dictator.

The verse ‘give to Caesar what belongs to Caesar’ was a phrase from the bible in the book of Matthew urging people to give a part of their income as revenue.

“I, the President is in the capacity of Caesar and everyone must do what is expected of them and give me my share,” said the President.

The president added that a country’s growth is sustained by the revenues and tax collected.

A lovely celebration at Christ is the Answer Ministries #CITAMat60. Hongera on turning 60!! Glad to join The President, Deputy President and the congregation of NPC #Citam for this beautiful celebration. pic.twitter.com/uTTqtotLw1

He ideally expounded on the big four agendas that need a good share of funding that comes from the tax payer.

‘We need every coin we get for this country to grow and get to where we want it to be,” added the President.

The war on tax collection has been intensified recently by a crackdown on those with tax frauds.

First it was the gambling businesses that were operating in the Country illegally without conformity to paying tax such as Sportpesa.

A directive was issued by interior CS Fred Matiang’i where all these gambling companies were shut down and forced to adhere to new regulations, something that some have failed to keep up with.

Later followed the City tycoon and billionaire Humprey Kariuki who was charged of tax evasion and fraud resulting to Ksh.41 Billion.

The tycoon was later released on bail with the case awaiting hearing.

DPP HAJI orders the arrest of billionaire Humphrey Kariuki and 8 others over Sh41bn tax evasion at Africa Spirits/Wow Beverages factory in Thika. pic.twitter.com/dxeG7Gm7FA

The most recent case details the power couple of Keroche Breweries who were allegedly accused of tax evasion amounting to Ksh.14 Billion.

The couple was arraigned and also released on a cash bail with DPP pledging to probe more into their cases and unmasking the frauds committed.

The DPP had earlier in the year made a guarantee to go after all illegal businesses that did not comply to the tax rule.

Noordin Haji had pledged to go after every individual not minding their stature or position.

Statistics from the Kenya Revenue Authority (KRA) revealed that about 600 individuals had failed to file their tax returns hence evaded paying tax for their businesses.

Ideally, the KRA officials had promised to prosecute the 600 people leaving no stones unturned.

The tax collection target by the treasury is Ksh.1.8 Trillion which was never met in the last financial year.

The revenue collection is at Ksh 1.58 Trillion hence the major move by KRA to crack down on tax evaders.

According to President Uhuru, taxation is a must and anyone who fails to adhere to that must be prosecuted or face consequences in accordance with the laws of the Country.