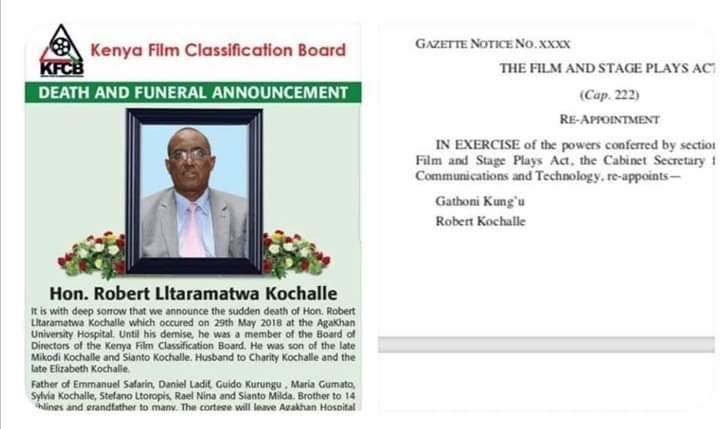 The government has been left embarrassed after it emerged that a man who died in 2018 has been given a job by Information CS Joe Mucheru.

Through a Gazette notice dated October 17, Dr Mucheru appointed Robert Kochalle to the board of the Kenya Film Classification Board for three years.

“In Exercise of the powers conferred by Section 11A (e) of the Film and Stage Plays Act, the Cabinet Secretary for Information, Communications and Technology re-appoints – Gathoni Kung’u, Robert Kochalle and Nereah Aluoch Okanga as members of the Kenya Film and Classification Board, for a period of three (3) years, with effect from 21st October, 2019,” Read the Gazette Notice.

It later emerged that Kochalle passed away on May 29, 2018, at the Agakhan University Hospital. KFCB bought a whole newspaper page to announce his death with their letterhead at the top. 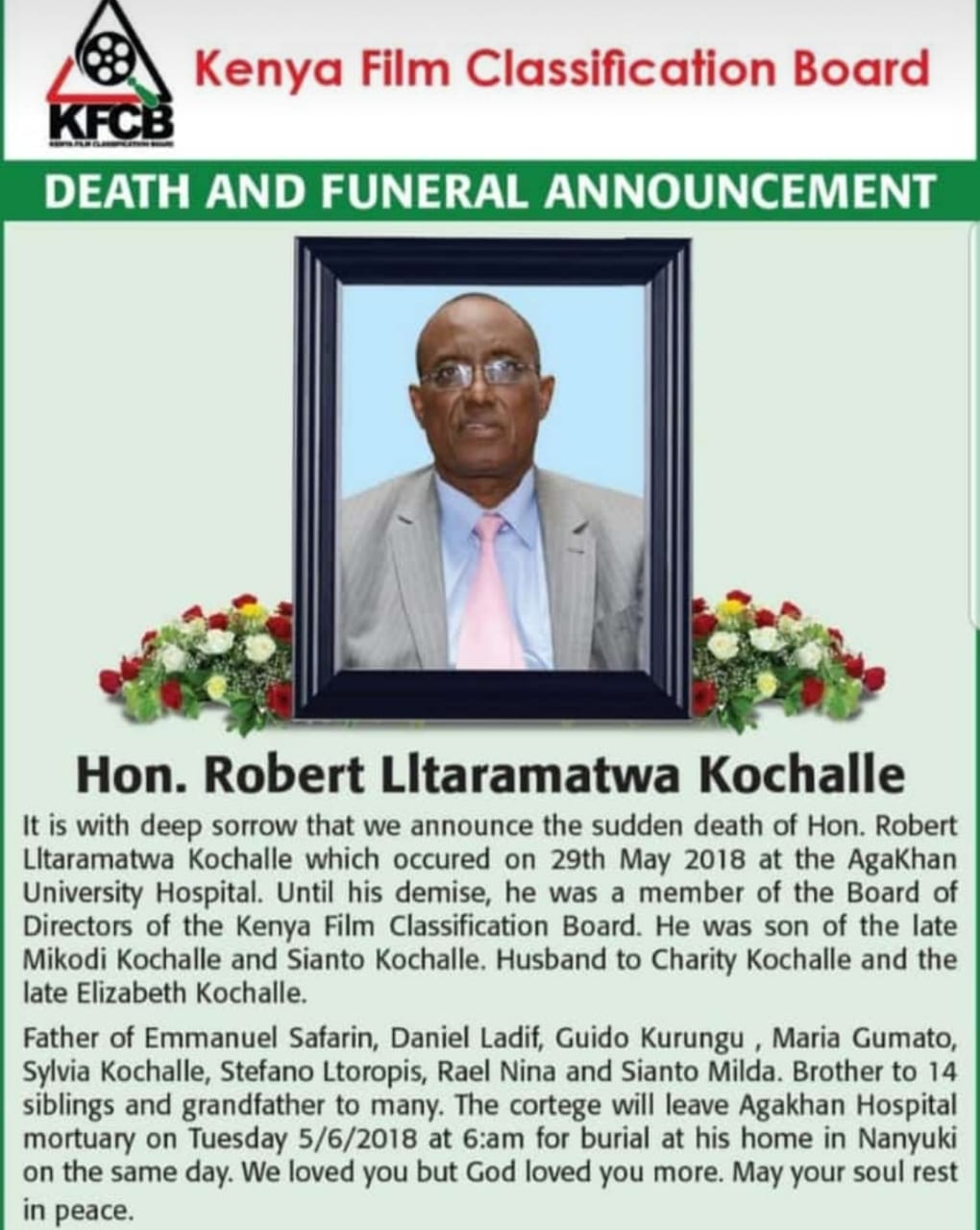 It seems someone at KFCB had been pocketing his allowances and was hell-bent on continuing with the vice for the next three years.

Kenyans have taken to social media to question how the government could make such a big blunder.

Kenyans have little faith …. Many are followers of that bearded who claims to resurrect the dead ….. Has the family of Mr. Kochalle disputed that their kin has resurrected? And I know my friend Dr. Ezekiel Mutua as a man of God … Please, let’s celebrate new life! pic.twitter.com/BnTyjhZqkk

Someone suggested that maybe the government was trying dead people since the policy of appointing the old has flopped. This follows the recent appointment of former Othaya MP Mary Wambui as the chair of Employment Authority.

We can try out the dead. The elderly have failed.

However, KFCB CEO Ezekiel Mutua has rubbished the backlash, saying that it is just a small issue that was blown out of proportion.

“Small issue being blown out of proportion. The Board presented the notification to the Ministry for replacement and inadvertently he was reappointed,” Mutua said through his Twitter handle.

Small issue being blown out of proportion. The Board presented the notification to the Ministry for replacement and inadvertently he was reappointed. It was not CS Mucheru's mistake at all as the conversation started when KFCB was under under Ministry of Sports & Culture. pic.twitter.com/0e46d33awc

Mutua further explained that Mucheru should not be blamed for the error because it happened when KFCB was still under the Ministry of Sports and Culture, currently headed by Amina Mohammed.

This, however, did not silence angry Kenyans who have bashed Mucheru:

EXPECT ANYTHING from CS Joe Mucheru. He is unapologetic about ethnic discrimination. The man with tantrums of huge proportions does not surprise anyone that he re-appointed late Hon. Robert Kochalle (may his soul RIP) to the @InfoKfcb board. @mucheru has eroded all gains in ICT pic.twitter.com/3P9jwGjZi5

As Miguna engages Raila Odinga,late Robert Kochalle who passed a year ago,was being appointed to the #Kenya Film Classification Board….@JubileePartyK Has graduated from nominating oldies to resurecting the dead for appointments pic.twitter.com/AbUD3EXtJo