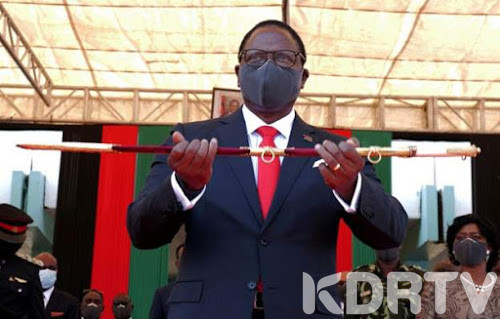 (KDRTV) – New Malawi President Lazarus Chakwera has shocked many people after he named a controversial Cabinet full of his friends, some of whom are family members.

Bishop Chakwera who was elected to a lot of fan fair last month named a couple; Sidik Mia and his wife as the Transport Minister and Deputy Minister for lands respectively. Their niece Halima Alima Daud is the Deputy Minister of Local Government.

Malawi's new President Chakwera causes outcry after appointing siblings, a couple and in laws as Ministers.

Kenny Kandodo is the Labour Minister. His sister, Khumbize is the Health Minister.

Sidik Mia is the Minister of Transport. His wife, Abida Mia is Deputy Minister of Land. pic.twitter.com/J6w8zGgkEo

Businessman Gospel Kazako has been appointed information minister and his sister-in-law Agnes Nkusa Nkhoma is the deputy agriculture minister.

The new labour Minister is also a sister to the health minister.

It is also believed that the new Health Minister owns the biggest pharmacies in Malawi and this will result to a conflict of interest. The Mines Minister also owns mining farms.

A grouping called Youth for Change (YFC) has planned nationwide demonstrations against what it describes as a false cabinet.
President Lazarus Chakwera last night released a 31-member cabinet that has seen members of the same family being appointed.#CFMNews #Malawi pic.twitter.com/bOZIvKcDMB

Former President, Joyce Banda’s son, Roy Kachale-Banda, has also been appointed to the Cabinet as Minister for Industry.

Chakwera accused his predecessor Peter Mutharika of practising nepotism. However, the President’s cabinet is composed of people from Central Malawi, which happens to be his political rock.