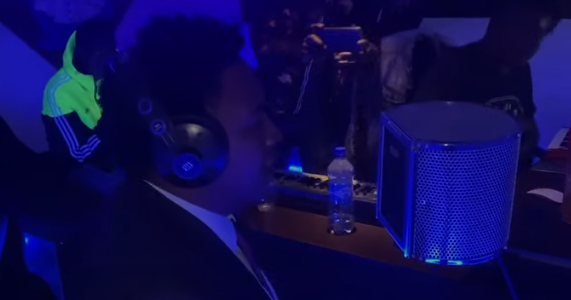 Ledama has revealed that he has been spending a good number of hours of his days in the studio working on an album that will highlight corruption in Kenya and Africa in general.

“And if you think we live in the land of plenty …Then you should try to be me …oh, just for a day juggling all sorts of careers …something in the pot,” Olekina stated on Twitter.

Not much about the album is out yet but according to a video that has been doing rounds on social media, the album will have a strong Maasai influence.

The album will include genres such as Hip hop, Jazz, and spoken word.

“I am working on a big project, a big project actually; one on some sort of spoken word, kind of hip-hop, jazz spoken word hip-hop focusing on the corruption I have witnessed in the country as a Senator. It’s about some of the things I have seen destroying this country,” he says, speaking on a video clip he posted that shows him in studio,” he said while speaking to Standard Media.

“I have got a collection of the debates I have seen in Parliament, some of which have attracted a lot of attention worldwide. There is one that has been viewed online by over 14 million people, worldwide.

“You know, there is this argument that corruption is an African thing. We try so much to fit in as Western but we can’t. There is a recent uproar in South Africa where (former president) Jacob Zuma was taken to jail after being criticised for spending State money to build his retirement home.

“When you think about it, you know… in Kenya we spend money to build our politicians mansions. When we think of it as a true African thing we start to accept it. That is what the project is focusing on, in part.”

The senator believes the project will bring out the true evils of corruption in Africa and Kenya in particular.

The album has been in the pipeline for quite some time now.

“It started a long time. We own studios, so here I was just in one of those studios arranging and recording the beats. You know whenever you arrange your song there is a certain beat you pick up so that is what I was doing in what you have seen,” he said.

“The project brings out the true meaning of corruption in Africa; the advantages and disadvantages. It is also touching on my other hustles, you know, I have many other hustles.”