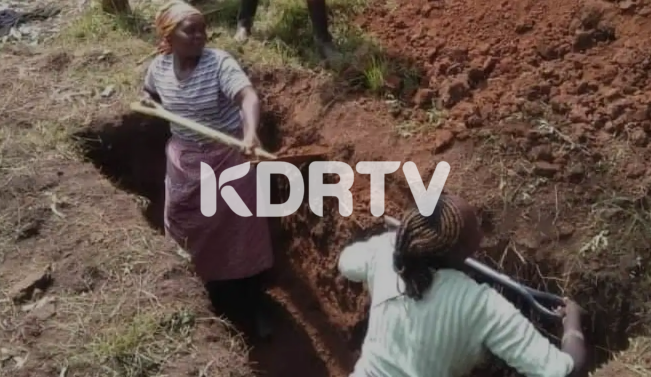 Nyandarua women who made news following a photo of them digging a grave went viral have finally opened up on why they took up the job.

A photo of several women digging the grave went viral early this week leaving many questioning where the men were in the village as the woman did the heavy lifting.

According to K24, a man decided to look for a few men to help dig the grave in the village after a cleric passed on but was shocked only women came to the site.

Noticing the strange occurrence since digging graves is normally customarily reserved for young men in the community, he quickly took the photos and shared them on WhatsApp groups which immediately went viral.

“I had never seen anything like that before, “he said.

“The work of digging graves is customarily reserved for energetic young men in this community, so seeing women performing the task was shocking. It was an astonishing sight.”

Soon after the photos went viral, Kenyans were quick to blame alcoholism that has taken over the youths in the area leaving women with no options other than doing such jobs.

Others, however, said that young men shunned this particular assignment after leaders in the community, who included the deceased, berated them.

The man who took the photos is now fearing for his life since he has become a target for taunts and threats. Residents of Wiyumiririe village, Ol Kalou constituency are accusing him of tainting their image.

“I am keeping a low profile for now,” he said.

“I cannot be too sure of what some people might be up to. I never expected
the photos would stoke this level of opprobrium.”

The deceased was not from the general area, but was buried in the compound of a church he served as a cleric.

The women who dug the grave were there to supply tea only to find old men who couldn’t do the job so they decided to chip in.

“A couple of women and I had prepared tea in a neighbour’s homestead in readiness for the young men who would come and dig the grave,” said one of the ladies present.

“I was sent to check how many men were there, so we could know the number of cups to carry, and discovered there were only a handful.

“I was sent to check how many men were there, so we could know the number of cups to carry, and discovered there were only a handful.

“The ground was also very hard. Some of the men present were old and frail. When we delivered tea and snacks to the gravesite with the other women, we decided to assist with the digging as the men took refreshments.

READ ALSO: Kenyan Man Who Confessed Of Killing 17 Women And Had A Target Of Killing 100 Women Set Free

“That is when Njogu arrived and took the photos. Had we not chipped in, the men would probably not have completed digging the grave,” She said.

“We wouldn’t have wanted that, as the funeral was slated for the following day.

“We felt we had to help, not only because the deceased was a man of God, but also because we wouldn’t have wanted shame to befall the village the following day, with a half-dug grave.”