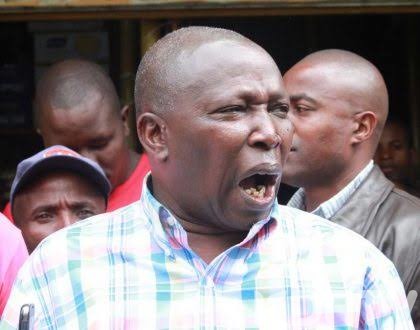 Nominated MP Maina Kamanda has expressed his feelings concerning the Mt. Kenya rift of voters dismissing politicians who were dividing the region.

Kamanda has greatly expressed that the Mt. Kenya region was independent and would not be swayed into supporting one person since they owed nobody anything.

At the same time, Kamanda pledged support for BBI adding that constitutional changes and developments are being instituted through a report that will benefit all Kenyans equally.

“Our community will not be bullied into pacts with anyone. We have no debts with anyone as Jesus already paid for it,” says Kamanda.

These remarks were made during a church service attended by other Mt. Kenya leaders including Nanyuki Central MCA Veronica Ikinyua and Laikipia Women Rep Aspirant Mary Miano in a bid to offer support for the Building Bridges Initiative.

"Our community will not accept to be arm-twisted into pacts by anyone. We don't have any debt with anyone in this country, the only debt we had was paid by Jesus Christ on the cross," Maina said at the AIPCA Thingithu Church in Laikipia https://t.co/ib2wp0GM1H

The previous weekend, two teams had clashed in church leading to the arrest of Kiharu MP Ndindi Nyoro, who later apologized for the drama caused.

The two teams Kieleweke and Tanga Tanga had disagreed and disputed during the service with hateful remarks thrown taint the various teams.

The Mt. Kenya region has been a hot bed lately, with some leaders including the Kirinyaga Governor Anne Waiguru dismissing the Ruto-Uhuru pact of 2012.

Waiguru advocated for an inclusive government through the BBI where other tribes would be given chance for top leadership positions.

Ideally, the team criticized the actions of Kiharu MP Ndindi Nyoro, terming church altercations as illegal and out of contest.

“A church is an altar of God and should be accorded maximum respect. Those who want to flex their muscles should open a stadium,” said Kamanda.

The three leaders asked the church members and the residents at large to follow the direction and precedence set by the president Uhuru Kenyatta and his brother Raila Odinga.

They insisted it was the only way that Central people would be included in the administration of government come 2022.

According to them, the Punguza Mizigo Bill was as useless as the sound of the name with empty promises and nothing to offer to Kenyans.

“The only thing with Punguza Mizigo is its name. It carries empty promises to Kenya unlike the BBI which will involve an inclusive government administration” said Miano, a former Woman Rep Aspirant.