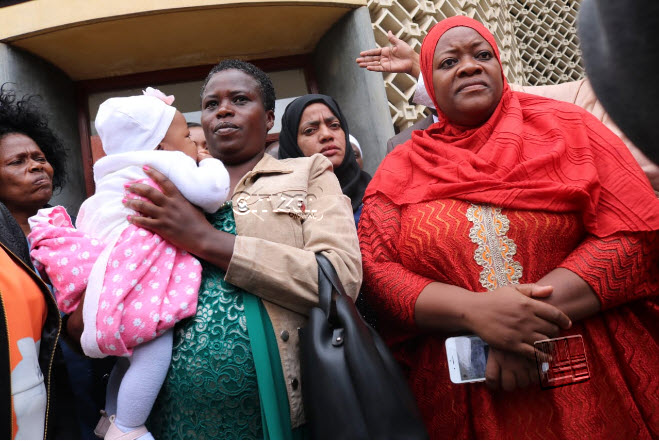 Parliament was brought to a standstill on Wednesday morning after Kwale Woman Representative marched in with her infant baby.

The Woman Rep Hassan Zuleika disrupted the proceedings when she showed up carrying her infant, citing issues to do with a family emergency.

The speaker together with the male counterparts were in utter disbelief and ordered her to walk outside as it was against the parliament rules.

READ ALSO: Are Top Mombasa Politicians Behind The Wave Of Attacks In Bamburi?

Drama then ensued as the female law makers stood by her side and protected her together with the baby from being evicted out of the house.

According to the speaker Christopher Omulele, the parliament was an inappropriate place to bring and take care of a child hence reason for her eviction.

“This is not the place to bring a child. You have a right to take care of your infant baby but not here in these chambers,” he said.

The sergeant at arms were asked to take the woman Rep outside, something that she did not take lightly.

The other female law makers accompanied her outside forcing the proceedings of parliament to be brought at a halt.

Speaking to the press, the woman Rep said that she was a mother with an infant baby who needed urgent care after a family emergency came up.

She added that she could not have left the baby alone and was thus forced to appear in Parliament with the infant.

“I was forced to come to work with the baby because I had a family emergency. I chose to attend to both duties of being a mother and coming to work. My child is not a bomb that would explode in parliament,” said the Woman Rep.

The other female MPs were disgusted by the speaker’s actions to evict Kwale woman Rep saying it was against the child’s rights.

Earlier in 2013, MPs had passed a motion for the parliament management to set aside a section where lawmakers who were mothers and had infants would breastfeed and or change them.

The motion was passed although nothing has commenced or  been implemented ever since.

The Woman Rep together with female MPs said that it was unfair since they were playing more than one role, tackling motherhood and work all at the same time.

Therefore, they advocated for a change of the same and condemned the actions of the speaker together with the sergeant at arms.