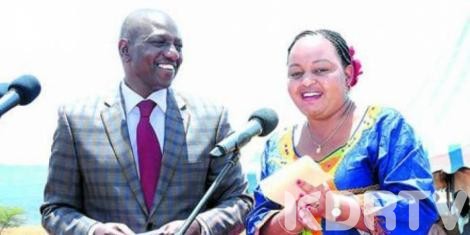 (KDRTV) – In 2018 Deputy President William Ruto and Kirinyaga Governor Anne Waiguru were named as the first and second most corrupt Kenyans by IPSOS Synovate.

A few days later, Waiguru led a section of Kirinyaga MCAs to Ruto’s Karen Residence. Everyone thought that it was the beginning of a formidable team. Waiguru would have easily been Ruto’s running mate in 2022.

However, things didn’t go according to plan as Waiguru joined the handshake team and became one of the DP’s biggest critics. Last year, the Governor advised President Uhuru Kenyatta to divorce the marriage with his DP because it was no longer tenable. She told everyone that wanted to hear that all Mt Kenya politicians supporting Ruto had been bought. Unfortunately for Ruto, you cannot buy a Kikuyu, you can only rent one.

Waiguru was officially the face of the BBI and handshake not only in Kirinyaga but also in Kirinyaga. ODM leader Raila Odinga became her biggest friend.

However, not very many politicians were happy with Waiguru’s rise. She has no friend in Kirinyaga. All the political leaders in the county are against her style of leadership.

Today, the governor accused Interior PS Karanja Kibicho of orchestrating all the woes she is facing in Kirinyaga. She said Kibicho wants her out because he wants to be the face of the BBI in Kirinyaga. Yes, BBI!

However, the question she has refused to ask is who is behind Kibicho’s influence? Kibicho cannot frustrate Waiguru without President Uhuru Kenyatta’s consent. After all, the PS works in Uhuru’s government.

The handshake team, which Waiguru talks so fondly about, has refused to protect her from Kibicho or worse it is using Kibicho to fight her.

Maybe it is time for Waiguru to go back to Ruto’s camp. In 2015, Ruto used his Chief of Staff Meriane Keittany to stop Mithika Linturi from tabling an impeachment motion against Waiguru.

Currently, Kirinyaga Woman Rep Purity Ngirici is the DP’s point person in the county. But the two can reconcile and work together just like they did in the run-up to 2017 elections.