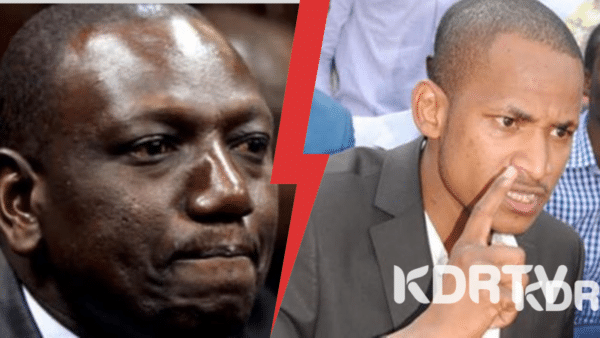 The Member of Parliament from Embakassi East Constituency, Babu Owino has called the Deputy President Dr. William Ruto a thief and the same time the Lord of Poverty who has impoverished Kenyans for many years and has nothing to offer to Kenyans rather than stealing from them.

He said this remarks while addressing media in Parliament buildings.

READ ALSO:Mp chased away in Kisii because he belongs to TangaTanga

The Deputy President Must Stop Blackmailing The President Using Some Lilli-works, Some Demagogues In The Name Of Trying To Paint The Good Name Of Our President.He Wants To Paint It Wrong Because He Is So Focused On The Idea Of Winning.

The 2022 Election While He Has Not Performed Anything.Between 2013 And Now The Deputy President Has Been Moving Faster Than A Gazelle In This Nation Trying To Confuse Kenyans In His Wisdom Or Lack Of The Same.Let Him Know Clearly That Kenyans Are Not Fools.

Kenyans Are Famished Because Of The Money That Was Taken By Ruto From Kimwarer/Arror Dam.

Kenyans Are Impoverished Because Of The Money That Was Taken By Ruto That Was Meant For Euro Bond.

Kenyans Are Destitutes Because Of Ruto.He Took Money From Both Weston And SGR.

Let’s Ask One Question Between RAILA ODINGA AND RUTO,WHO IS THE LORD OF POVERTY.

Ruto Has Ensured That Kenyans Are Poor By Stealing Their Money.

Thank You And I Owe Nobody Any Apology.