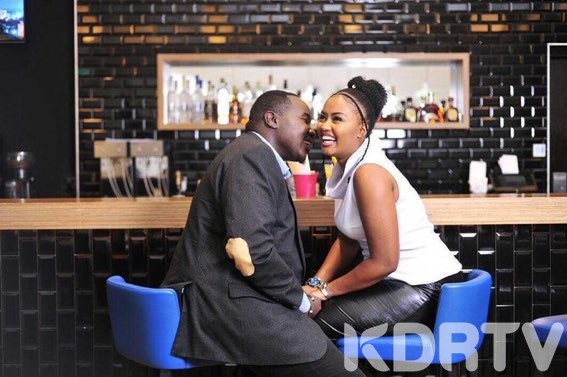 (KDRTV)- Citizen TV journalist Willis Raburu is currently the talk of town following revelations that he has broken up with his wife Mary Ngami alias Mary Prude.

According to gossip blogs, Raburu and Prude separated after losing their child early this year. However, things quickly escalated for the worst after Prude learnt that the 10 over 10 host was cheating with a Ugandan woman.

The couple moved out of their matrimonial home in Langata. Raburu helped pay Prude’s two-month house rent in Thindigua, Kiambu County. He moved to stay with his new Ugandan lover in Kilimani.

But why would a man leave his wife during such trying moments? Kenyans believe that Raburu could not resist his Ugandan beauty because apparently, women from the neighbouring nation know how to take good care of their men.

Wife materials come from Uganda, Somalians comes second"our Kenya women are locusts who invades your house to eat whatever you had gathered.why can't the government spray them to another country? Willis raburu is the volume okay

Not less than 24 hours I warned Kenyan ladies to humble themselves or else kenyan men will go for Ugandan ladies see what is happening with Willis Raburu he has already made decision to dump her wife for Uganda lady, sometimes listen to Andrew kibe advice pic.twitter.com/Gmec7Xy54J

We don’t really know what happened but the pressure of losing an unborn first baby can go overboard. Kenyans believe Raburu did the right thing to move on.

In as much as Willis Raburu story is unfortunate, I am glad he has moved on, in the shortest time possible. When you stay and try fixing things, trust me, you are going to die of depression. These women are ruthless and only thrive in chaos. If she wants to stay, she will stay! pic.twitter.com/DIsMcbiVVC

Raburu joins the scary list of celebs who fell out with their spouses barely a few years after a glamorous wedding. Kenyans have not forgotten the story of Betty Kyallo and Dennis Okari. The couple fell out barely one year after their wedding. Okari has moved on, is already in another marriage but Betty, on the other hand, has married alcohol.

A vide of Betty Kyallo saying she calls all her exes when drunk recently went viral on social media.

Subscribe to watch latests videos
In this article:Headlines, Willis Raburu