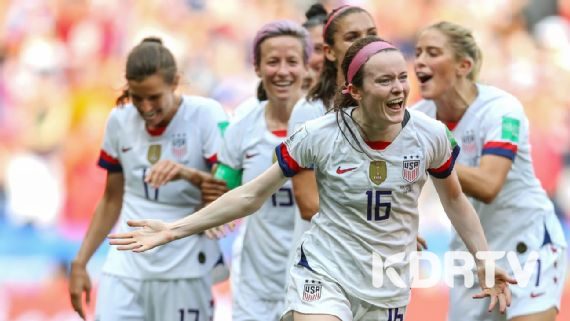 United States Women National Soccer Team defended their title after beating Netherlands 2-0 on Sunday in the Women`s World Cup 2019. The first goal was scored by Megan Rapinoe from a penalty spot, while Rose Levelle sealed the fate of Netherland`s women by scoring the second goal at the 69th minute of the math.

Notably, the Goalkeeper Sari van Veenedaal was the key for the Netherlands side. She shone throughout the Women`s World Cup 2019. During the first half of the finals, she made four excellent saves.

The Netherland side started with a defensive gaming however, the first goal made them to take the risk of going to attack, perhaps a things that the USWNT was waiting for to seal their fate.

Another notable moment of the match was during the last 2o minutes when both sides had opportunity to score. However, the USWNT seemed likely to add the third goal than the Netherlands side could neutralize a single USWNT goal.

At the final whistle, while the USWNT was sprinting around the field, the Netherlands players were down to the ground lamenting the defeat with some collapsing to the ground- they regretted loosing to USWNT at the Women`s world cup 2019.

After the triumphant defeat, the US nationals starting pouring praising and comment regarding their women football team. Some urged the Government to pay the ladies what they deserve after shining through the Women`s World Cup 2019