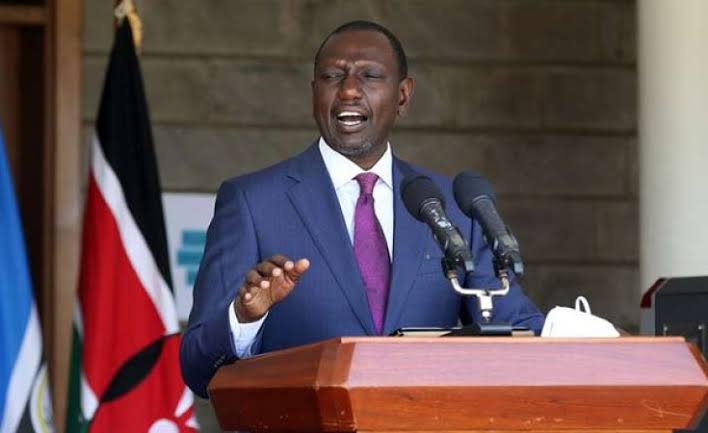 Deputy President William Ruto likes to tout himself as a Christian first-class. According to the DP amongst his competitors for the Kenyan presidency he alone is a Godly man and a true believer.

More recently, the Deputy President has taken to comparing himself to the biblical Nehemiah the cupbearer to the Persian King Artaxerxes; the man tasked to rebuild the fallen walls of Jerusalem.
So William Ruto clearly fancies himself as a good Christian and who am I to say he is not. As an aspiring good Christian myself, I would under ordinary circumstances be the last to judge our Deputy President or impugn his Christian credentials. But since William Ruto has chosen to make this part of his political CV for election as President, it behooves every voter to interrogate whether Dr. Ruto is the man he says he is.

Luckily, the Christian text, the Holy Bible offers a reliable, independent and unbiased basis for assessing and vetting William Ruto, the self-proclaimed Chritian-in-Chief; the people of Kenya thus need not perish for lack of knowledge.

So what does the Bible say about a good Christian and is William Ruto the Nehemiah of our time or is he more like Simon the Sorcerer of Samaria who despite believing in the gospel of Christ and being baptized tried to bribe God by offering money to the Apostles Peter and John. (Acts 8:9-25)

Apart from the above foundational principles and Commandments of Christianity, amongst the things the Bible abhors the most are greed, pursuit of dishonest gain, the shedding of innocent blood, hypocrisy, moving of boundary stones or beacons (land grabbing) and distorting the Gospel of Jesus Christ to mislead the masses or for personal benefit. The question then is how does WSR fair in this regard.

Prophet Jeremiah condemns those with “eyes and heart only for dishonest gain and for the shedding of innocent blood” (Jer 22:17). God Himself speaking through prophet Ezekiel says “behold, therefore, I strike my hands together at the dishonest gain which you have made, and at the blood which has been in the midst of you”. (Eze 22:13)
The lumping together of dishonest gain and the shedding of innocent blood in the above Bible verses is quite appropriate in our case where corruption often leads to preventable deaths and destroys the lives, livelihoods and dreams of millions of innocent Kenyans.

As William Ruto pontificates, the innocent blood of Chris Musando, Jacob Juma, Meshack Yebei and others killed under his watch (some even say instructions) continues to cry from the ground.
Likewise, William Ruto has not denied or debunked the constant accusation that his vast political ‘war chest’ has hurriedly been assembled at the public’s expense through an unprecedented pursuit of dishonest gain and the pilfering and plunder of the public coffers.

On the subject of hypocrisy, the good book teaches us that the people who proclaim and publicize their piety from the rooftops for the public gallery are hypocrites, serpents and a brood of vipers like the scribes and Pharisees of old who crucified Jesus and persecuted the Apostles. (Matt 6:2 & 23:15)

Our Lord Jesus Christ himself makes it very clear and unequivocal that prayer and piety is a private matter that ought not to be unduly publicized. He tells us that “when you pray, you must not be like the hypocrites; for they love to stand and pray in the street corners, that they may be seen by men. tBut when you pray, go into your room and shut the door and pray to your Father who is in secret; and your Father who sees in secrets will reward you”. (Matt 6:5-6)

Jesus Christ further warns Christians to “beware of practicing your piety before men in order to be seen by them; for then you will have no reward from your Father who is in heaven”. (Matt 6:1)
Paul the most prolific of all the Apostles lambasts those who are boastful about their Christian mission and calls them false apostles, deceitful workmen disguising themselves as apostles of Christ and warns that even Satan disguises himself as an angel of light. (2 Cor 11:12-14)

Therefore, from a biblical perspective and in the eyes of the Founder of Christianity (Jesus Christ) and His Apostles, between William Ruto and the other Presidential candidates who are in all probability praying privately and have less appetite or penchant for public display of faith, who is the better Christian? William Ruto says he is the better Christian because he is good at showing it but Jesus, Paul and Peter say otherwise. Who do you believe?

The Bible condemns all forms of greed but is very categorical about deceitful acquisition of land. Therefore, you shall not move or remove your neighbour’s beacon or boundary stone (Deut 19:14) or encroach on the field of the fatherless (i.e. the weak); Prov 23:10.

Distorting or Misusing the Word of God Paul dictating to the scribe Tertius cautions the nascent Roman Church against those who in pursuit of their own appetites (i.e. interests) use fair and flattering words to deceive the hearts of the simple-minded. (Rom 16:18)

The Bible recommends that anyone who misleads the gullible Christian masses and causes them to sin should have a large millstone fastened around his neck and drowned in the depth of the sea. (Matt 18:6; Mark 9:42 & Luke 17:2)

William Ruto’s claim to Christian hegemony is not pegged on his adherence to the basic tenets of Christianity or observance of the Ten Commandments but on his already discussed flare for public display of faith and his well-advertised generous donations to the Church and a select needy persons or groups. Never mind that obedience is better than sacrifice (1 Sam 15:22).

The Gospel according to Saint Samoei is give and all your sins will be forgiven or better yet, give and you can sin all you want. This new and novel Gospel posits that we are saved not by His grace but by our works. To the majority of Ruto’s hustler nation who have nothing to give to save their poor souls, shauri yenu; Christianity and salvation is now an exclusive club to be patronized by William Ruto and his moneyed friends who can afford it.

Fortunately, on the issue of giving the Bible once again contradicts William Ruto’s philosophy. As a good Christian, the Deputy President surely knows the solemn advice given by Jesus Christ that “when you give sound no trumpet before you as the hypocrites do in the synagogues and in the streets, that they may be praised by men…. But when you give do not let your left hand know what your right hand is doing so that your alms may be in secret and your Father who sees in secret will reward you”. (Matt 6:2-4)

Similarly, the story of the poor widow who contributed a paltry penny to the Temple treasury but was deemed to have given more that than the rich who gave large sums is well known. (Mark 12:41-44)

While the jury may still be out on who amongst those eyeing the Kenyan Presidency is a good Christian and who is not, what is clear is that the good old Book that William Ruto likes to quote is telling us a totally different story from that which the DP would want us to believe.

You are Not Nehemiah, Sir

So Mr. Deputy President Sir, you may be many things but you are no Nehemiah; quite the opposite. Nehemiah was fully loyal and subservient to his boss the King of Persia and he could be trusted with the public coffers. There was also never any fear that Nehemiah could change or move the beacons of the walls of Jerusalem. Furthermore, apart from fictitious walls around non-existent stadia, the only other walls you have ever built Mr. Deputy President are walls of division and hatred so please give us a break.
I conclude with the words of the renowned African scholar and writer Prof. Wole Soyinka that “a tiger does not proclaim his trigritude…”
God Bless Kenya.

The Author is an Advocate of the High Court of Kenya & a Member of the Raila Odinga Presidential Campaign Board. The views expressed here are largely his own (t: @Saitabao) and he  does not work for KDRTV News