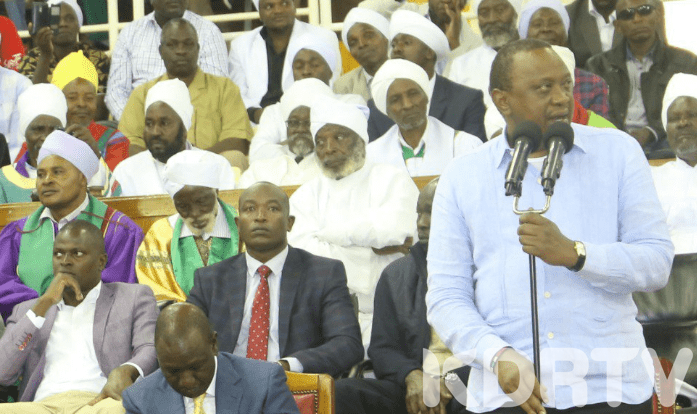 President Uhuru Kenyatta is set to meet Mt Kenya leaders this Friday, in what has been described as a tactical masterplan ahead of the release of the much anticipated BBI report.

According to the Daily Nation, the head of state will meet politicians, religious and business leaders in a yet to be disclosed venue this Friday. The agenda of the meeting is also yet to be disclosed but sources intimated to the newspaper that the handshake with ODM leader Raila Odinga and the volatile BBI report will dominate the meeting.

“He will meet regional leaders to make them understand the handshake and the BBI as he has been on the receiving end for long because of the two issues,” an MP seeking anonymity informed the publication.

The President has not been on good terms with Mt Kenya leaders, some of whom have publicly disagreed with him. In June this year, during an Akorino Church Function at Kasarani Stadium, Uhuru lashed out at politicians undermining his leadership.

“These thugs that we elected are busy politicking. They should not think I am their boy, they will not stop me from constructing roads. They didn’t look for votes on my behalf. I went looking for my votes. This rubbish should stop bothering me,” said Kenyatta.

The leaders led by Kandara MP Alice Wahome and her Kiharu counterpart Ndindi Nyoro reacted angrily to these attacks, asking the president to remember how they campaigned for him.

Currently, Mt Kenya is divided into two factions; Tangatanga and Kieleweke teams which pay allegiance to the Deputy President William Ruto and the handshake respectively.

Ruto has vehemently opposed the BBI report, which he accuses of seeking to sneak Raila to State House through the backdoor in 2022. He has been using Tangatanga politicians to advance his course.

It is not clear if the Tangatanga members in Mt Kenya have been invited to Uhuru’s meeting. But if the President manages to win the rebels over, then it will be a big blow to his deputy.