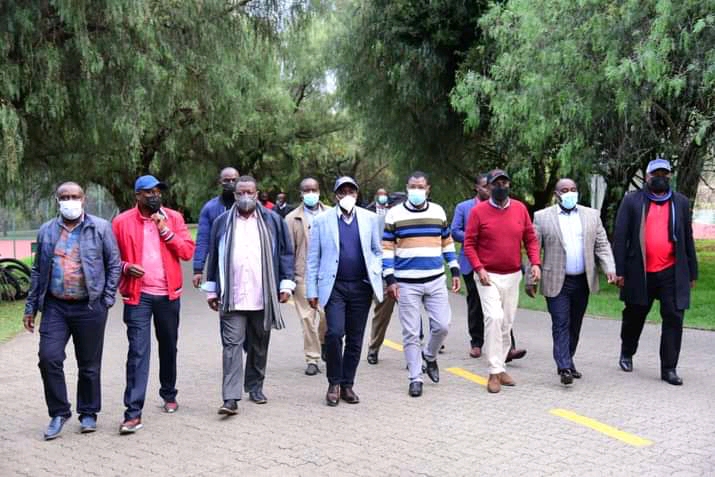 Speaking in Bungoma during his two-days tour in Western region, the second in power claimed that his bigwig opponents (ODM and OKA) ought to up their games and brace up for the huge task glaring at them of seeking endorsement from voters through campaigns and not awaiting to be endorsed by the President Uhuru Kenyatta.

“If they are men enough, let them stop hiding behind President Uhuru Kenyatta and come and face me on the ground” Ruto elicited the crowd at Sirisia market in Bungoma.

DP Ruto claimed that hustler nation movement has networked across the country and his opponents are in deep shivers following the rate at which the bottom-up movement is sweeping them (Opponents) even in their respective bedrooms.

He warned them (OKA and ODM) to accept the results and concede defeat in next year’s presidential race. He noted that Tangatanga camp is ready to accommodate everyone since it is a national party unlike other fringe parties (indirectly referring to ANC, Wiper, Ford Kenya etc) which have strictly mastered in taking members from selected regions.

“I am asking them (competitors) to stop hiding behind President Uhuru Kenyatta’s back and come to the ground and battle it out for the top seat. They are still stranded and have failed to name their preferred candidate and when they will lose elections, they will start crying that their victory had been stolen” DP Ruto said.

The former Prime Minister Raila Odinga is expected to tour president Uhuru Kenyatta’s backyard on Saturday in Kirinyaga where he will be hosted by handshake allied legislators from the region.