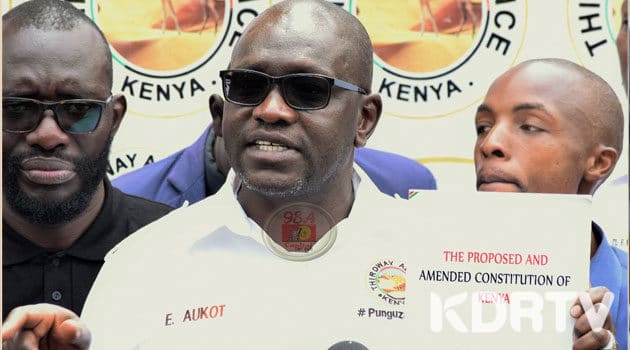 The proposed bill has been tendered to all the 47 legislative bodies by the Independent Electoral and Boundaries Commission (IEBC). The commission has also verified the 1.2 million signatures of validly registered voters which supports the proposal amendment of the constitution.

Ekuru Aukot was speaking during a press conference on Friday where he urged county assemblies to support the draft bill adding that if the bill is implemented, it add force to the devolution.

“I am urging all our leaders and Kenyans at large to take this initiative positively, support it and remove any kind of politics from it. I am certain that if no politics will be included in this bill, then all he forty seven counties will back it up,” Aukot said.

“And to our Parliamentarians, both in the National Assembly and the Senate, this Bill is about strengthening our constituencies and bringing real change to our people. I appeal to you not to take it as political competitiveness because it is not. Talk to all your MCAs and ask them to support it.”

The bill also seeks to introduce the election of two (male and female) legislatures from each county to settle the issue of gender disparity.

READ ALSO: Politicians and Hundreds of Mourners Expected in Vihiga Ahead of Kadenge’s burial Tommorow

According to the bill, the 1450 wards should be used as the primary unit of development of instead of the constituencies and thus they should replace the National Government– Constituency Development Fund (NG-CDF)

The bill will require to be amended by at least 24 county assemblies to proceed to the National Assembly and the Senate Assembly where two thirds of the houses is required to back it.

If the bill is endorsed by two thirds of the houses then it will be ready to be ascended by the President.